No. 4 LSU defense looks to fix deficiencies vs Vanderbilt 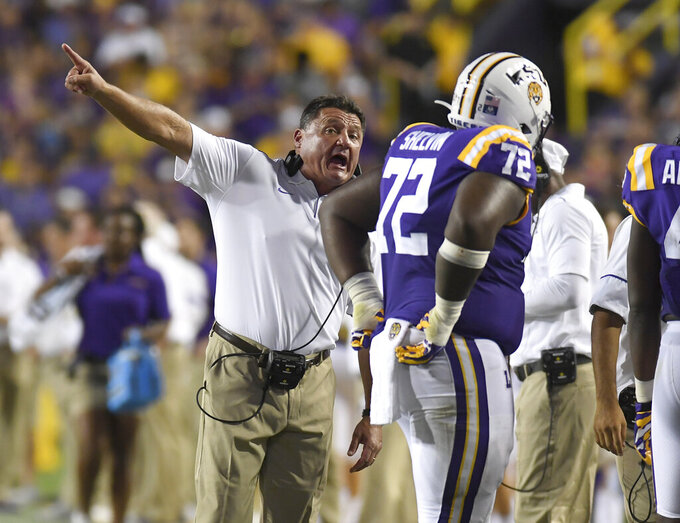 BATON ROUGE, La. (AP) — LSU linebacker Jacob Phillips hasn't enjoyed the fourth-ranked Tigers' 3-0 start nearly as much as he would have liked.

A combination of injuries, sporadic missed assignments and generally inconsistent play has resulted in some unflattering numbers for a defense boasting top-rated talent and coached by Dave Aranda, whose $2.5 million annual salary places him among the highest-paid coordinators in the nation.

"Obviously the team goal is to win. But besides the win, did we win as a defense? And if we didn't, then we come in on Monday acting like we lost," Phillips said. "That's just something you've got to do if you want to be critical of yourself and improve. We definitely have things to adjust to and change."

In their only game against a major conference team in Week 2 at Texas , LSU's defense allowed the Longhorns to gain 530 yards of offense and score 38 points.

Last weekend, the Tigers hosted FCS squad Northwestern State , a program that had never scored a touchdown against LSU in 11 previous meetings dating back to 1911. The Demons connected on two touchdowns passes in the first half in Death Valley, one of which was an easy throw to a tight end with no defender near him in the end zone.

Now LSU is opening Southeastern Conference play at Vanderbilt on Saturday, and racing to address its defensive deficiencies.

Tigers coach Ed Orgeron, whose specialty is defensive line play, said he's been disappointed that LSU has not been able to manufacture a pass rush with just four players.

"The pass rush will cost us. We're experimenting with different things." Orgeron said. "So I think you're going to see more blitzes, more creative ways to get a pass rush."

LSU's pass rush relied heavily on blitzes a season ago, when safety Grant Delpit tied for the team lead in sacks with five while top edge pass rusher K'Lavon Chaisson missed all but one game with a knee injury. Chaisson has again struggled to stay healthy this season. He did not play last weekend and Orgeron said he was questionable this week. Orgeron also ruled out two other starting defensive linemen: Rashard Lawrence and Glen Logan.

"We have some guys hurt. We're not getting where we want to go yet," Orgeron said. "I'm not saying that we can't get there, but we're not where we need to be."

"LSU's always fast and athletic," Mason said. "They got speed like in the secondary. When you look at them up front, they're big up front much like Georgia was and when you look at their linebacking corps, they can run sideline to sideline."

At least, that has long been LSU's reputation. The 2019 defense just hasn't lived up to it yet.

Orgeron noted he's been troubled by a lack of forced turnovers, leaving LSU at minus-1 in turnover margin so far.

Another issue LSU's staff has explored is how the unprecedented success of the Tigers' new up-tempo, spread offense has diminished the ability of defensive players to rest and regroup mentally before they have to run back on the field. LSU has averaged 55 points per game and usually takes three minutes or less off the clock on touchdown drives. That gives defensive coaches rushing to explain corrections and adjustment to players who also have less time to catch their breath.

But Orgeron also asserted that "the thing that affected us against Texas was their 19-play drive (early in the second half) and we couldn't get off the field on third down and couldn't stop the quarterback. That had nothing to do with our offense."

Orgeron said he suspects LSU will have to slow down the offense to control time of possession at some point this season, "but that hasn't been the case yet."

"The offense is going really fast, and I commend them on that," he said. "A lot of times, we could have gotten off the field, but we missed tackles or didn't run to the ball."

Phillips said Aranda provides his unit a checklist of game-specific goals each week. If they can check off each item, "we should have dominated the game on defense," he explained.

"We haven't been able to check off that whole list in its entirety yet this season," Phillips said. "That's what we're searching for."