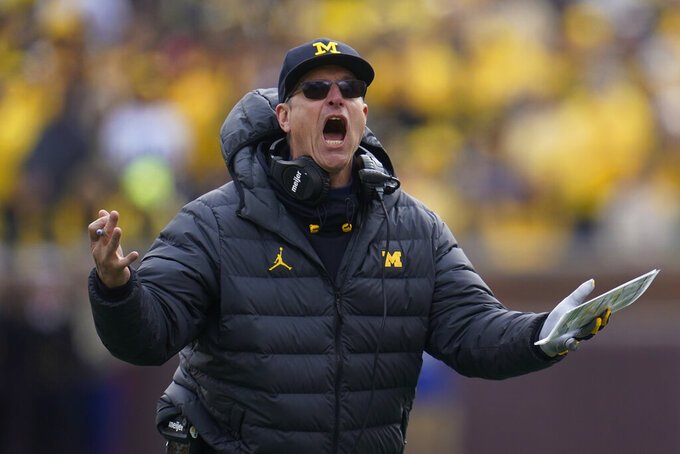 Line: Michigan by 22 1/2, according to FanDuel Sportsbook.

The Wolverines are aiming to keep pace with their goals to win Big Ten and national championships, and to end a two-game losing streak to the Mel Tucker-led Spartans. Michigan State is playing for bragging rights and to increase its chances of being eligible for a bowl.

Michigan's running game versus Michigan State's defense. RB Blake Corum is averaging 166.5 yards rushing, 5.87 yards per carry and 1.5 touchdowns in four Big Ten games. He ranks first in FBS with 13 touchdowns and second with 901 yards rushing. With reserve RB Donovan Edwards contributing, the Wolverines are averaging a Big Ten-best 241.7 yards rushing. The Spartans are giving up 153.3 yards rushing a game, ranking 11th in the conference and 78th in the country.

Michigan State: LB Jacoby Windmon. The UNLV transfer is the first Spartan to be named the Big Ten defensive player of the week three times in a season, and the sixth player to do it in conference history. He leads major college football with six force fumbles and ranks second in the Big Ten with 1.5 tackles for loss per game.

Michigan: DE Mike Morris. After Morris had half a sack in two seasons playing behind Aidan Hutchinson and David Ojabo, he has five sacks this season to double the total of any teammate. The 6-foot-6, 292-pound redshirt junior has eight tackles for losses, four QB hits, one forced fumble, a pass breakup and one blocked kick.

Both teams had a bye last week. ... The Wolverines are 7-0 in consecutive years for the first time since the 1974, 1975 seasons, and third time in Jim Harbaugh's eight seasons. ... Last year in a matchup of undefeated teams, the eighth-ranked Spartans rallied from a 16-point deficit with 6:47 left in the third quarter to beat No. 6 Michigan 37-33 thanks in part to Kenneth Walker III running for five TDs. ... Tucker is the first coach to lead the Spartans to wins in his first two games against Michigan. ... Michigan is averaging 42.7 points and is giving up 12.1 points per game, joining top-ranked Georgia and No. 2 Ohio State as the three FBS teams that rank among the top 10 in scoring offense, scoring defense and average scoring differential.