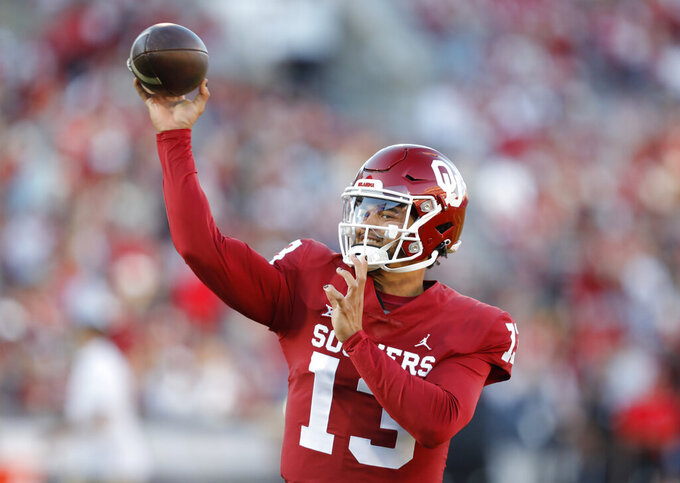 NORMAN, Okla. (AP) — Caleb Williams had a big starting debut for No. 4 Oklahoma, throwing for 295 yards and four touchdowns and running for another score in the Sooners’ 52-31 victory over TCU on Saturday night.

The freshman from Washington, D.C., unseated Spencer Rattler as the starter after leading a comeback victory over Texas last week in Dallas. He started fast against TCU with an opening 75-yard touchdown drive that took just under three minutes.

Williams didn’t learn he was Oklahoma’s starter until midweek. Riley said he was ready to play either of his former blue-chip quarterbacks, if necessary, against TCU.

“Caleb got the opportunity tonight, and obviously did a great job with it,” Riley said. “I’m confident that had Spencer gotten the opportunity tonight with the way he practiced, he would’ve played very well also. Thought the room handled it great. Proud of those guys for a winning effort and being team-first guys.”

Williams was 18 of 23 and ran for 66 yards on nine carries. He had a 41-yard scoring run, juking a defender at the line of scrimmage and taking off.

Oklahoma (7-0, 4-0 Big 12) began to pull away from TCU with three consecutive touchdown drives to open the third quarter, including two touchdown connections between Williams and receiver Jadon Haselwood.

Haselwood finished with 56 yards on a team-leading six catches. The third-year Oklahoma receiver was impressed by his quarterback’s poise, considering his inexperience.

“He’s a great leader for being a freshman. I don’t think he ever feels pressure,” Haselwood said of Williams. “He’s always in a good mood. Even last week, he felt no pressure. Like no fear, and you can tell by the way he played. Just a great kid. He can sling it, he can run, he can do whatever he needs to do to get the ball downfield.”

The Horned Frogs (3-3, 1-2 Big 12) were without running back Zach Evans, who had a Big 12 second-leading 586 rushing yards and five touchdowns entering the weekend.

TCU still had a chance early in the fourth quarter to cut OU’s lead to one possession, but punted after six plays and allowed OU to drain the clock to 1:09 on its final offensive series.

Williams joined an exclusive club on Saturday, becoming the Sooners’ first true freshman to start at quarterback since 1990.

Williams dazzled in his debut, setting OU true freshman records for both single-game passing yards and touchdowns. He is just the fifth true freshman quarterback to start for the program.

The Sooners are 7-0 for the second time in the last three seasons and are likely to move at least one spot higher in the Associated Press Top 25 after No. 2 Iowa lost to unranked Purdue on Saturday.

TCU: The Horned Frogs’ offense was able to expose a banged up Sooners secondary, which was without starting safety Delarrin Turner-Yell and cornerback Woodi Washington. TCU couldn’t keep pace, however, with a reinvigorated Oklahoma team.

Oklahoma: Lincoln Riley has to feel validated with his decision to turn to Williams, who had ESPN analyst Kirk Herbstreit questioning whether or not Williams deserves Heisman Trophy attention on the ABC broadcast.

Oklahoma: At Kansas on Saturday.