No. 4 Oregon shakes off slow start to beat Stony Brook 48-7 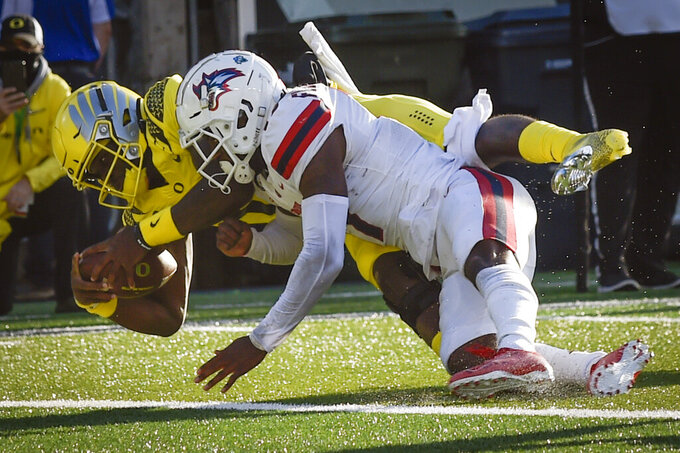 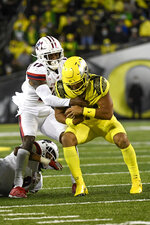 EUGENE, Ore. (AP) — True freshman quarterback Ty Thompson wasn't fazed at all when he got the nod for Oregon's second half against Story Brook.

Thompson threw two touchdown passes and the No. 4 Ducks overcame a sluggish start to beat the Seawolves 48-7 on Saturday night in a game delayed because of lightning.

Starter Anthony Brown threw for a touchdown and ran for another but left the game at halftime after he was sacked twice to close out the second quarter. It didn't appear to be serious.

“I thought Ty was very cool, didn’t flinch at all,” Oregon coach Mario Cristobal said. “I’ve seen sometimes that quarterbacks, you tap them on the shoulder and say ‘It’s your turn’ and their eyes get about yay big. Wasn’t the case with him at all, there was no flinch.”

The Ducks, coming off their big win last weekend at Ohio State, improved to 3-0 as they head into Pac-12 play next weekend.

It was Oregon's 14th straight win at Autzen Stadium, as well as its 28th nonconference victory at home. But the Ducks looked lethargic to start a game that was supposed to be an easy blowout.

“At the beginning, the first half, it was choppy, we played down to their level. And we need to figure out how to not do that in the beginning of the game. But second half we came back and we brought it back up to our level a little bit," Oregon running back Travis Dye said. "But there’s nothing satisfying about this win right now. We know we can do, we know what we should have done when we came in here.”

Stony Brook, which plays in the lower-tier Colonial Athletic Association, fell to 1-2. The game against the Ducks was Stony Brook’s first against a Pac-12 opponent. Oregon was also the highest-ranked team the Seawolves had ever faced.

“We took it as another game. We didn't worry about out opponent,” Stony Brook running back Ty Son Lawton said. “It's about us at the end of the day.”

CJ Verdell caught a 9-yard pass from Brown to give the Ducks a 10-0 lead, but Stony Brook closed the gap with Lawton's 5-yard scoring run before the first quarter was over.

It was Lawton's third touchdown of the season. Last week her ran for 134 yards and a score in the teams' 24-3 victory over Colgate.

Brown's 7-yard keeper extended Oregon's lead to 17-7 going into halftime. Brown, sacked on the last two plays of the half, did not return. He finished with 159 yards passing.

Thompson's 1-yard pass to Terrance Ferguson put Oregon up 24-7. Dye added a 3-yard scoring dash to extend the lead before the end of the third quarter.

Thompson found Dont'e Thornton with a 54-yard scoring pass with 8:26 left and Trey Benson closed out the game with a 3-yard touchdown run. Thompson completed six of nine passes for 82 yards.

“I was real proud of how our team competed from play one through the last play. We came here mentally prepared, and I think we proved we were up for the challenge, certainly against a quality opponent," Stony Brook coach Chuck Priore said. “And certainly I thought we gave them a pretty good scare in the first half.”

The game was delayed for a little more than a half-hour because of lightning in the area.

Oregon's defense was without both Kayvon Thibodeaux and Bradyn Swinson. Thibodeaux, mentioned as a top pick in the NFL draft next year, injured his ankle in the Ducks' opener against Fresno State and didn't play against Ohio State.

Swinson's injury was not clear. He had five tackles, a sack and a pass breakup in the Ducks' victory over Ohio State. Mase Funa and Keith Brown also sat for the game.

“We weren't trying to rest guys, we were just banged up," Cristobal said.

Stony Brook: The Seawolves are 1-11 against FBS teams. The lone win came in 2012 against Army. ... Fields finished with 131 passing yards and three interceptions.

Oregon: The Ducks jumped this week from No. 12 to No. 4 in the AP Top 25 following the 35-28 victory over Ohio State. It was the program's eighth win against a team ranked in the top five. It was also the teams' first win on the road against a top-five team since 2011. ... Verone McKinley III had two interceptions.