No. 4 TCU tries to wrap up perfect B12 season vs. Iowa State 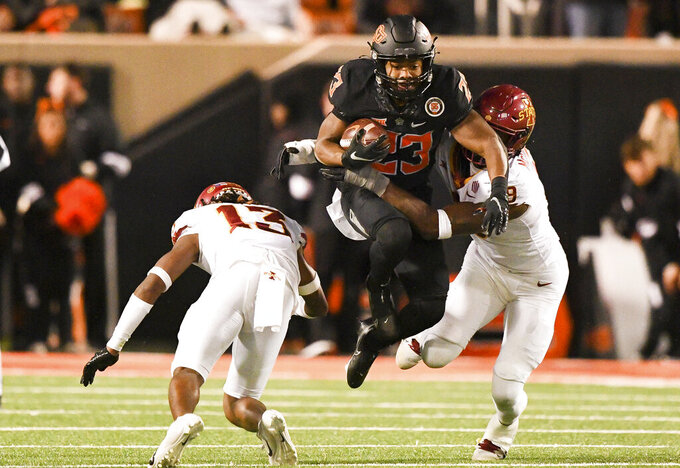 Already set for its second Big 12 championship game, TCU looks to become the first Big 12 team since Oklahoma in 2016 to finish the regular season without a league loss. The Horned Frogs are also trying to stay in position for a spot in the four-team College Football Playoff. Win or lose, Iowa State will wrap up its first losing season since 2016, which was coach Matt Campbell's first with the Cyclones.

Iowa State: Senior DE Will McDonald has 34 career sacks, which is tied for the Big 12 record first set by Texas Tech’s Aaron Hunt from 1999-2002. McDonald has five sacks this season.

TCU: QB Max Duggan, an Iowa native, has wins over every Big 12 team except the Cyclones during in his career. Duggan is 0-3 vs. Iowa State, even while completing 69% of his passes (48 of 70) for 676 yards with seven TDs and two interceptions in those games. Duggan has a Big 12-best 31 overall TDs this season while throwing for 2,858 yards and 26 TDs with only three interceptions.

These two teams have been on opposite sides of one-score games. Six of Iowa State's conference losses were by no more than a touchdown, or a total of 24 points (4 per game). TCU has four Big 12 wins by a TD or less. ... Iowa State senior WR Xavier Hutchinson has 252 career receptions, matching former Oklahoma State receiver Justin Blackmon for the most by a three-year Big 12 player. He leads the league this season with 105 catches for 1,160 yards. ... TCU running back Kendre Miller has rushed for a TD in all 11 games this season, and his 12 consecutive games dating back to last year is the longest active streak in the nation.