No. 5 Clemson looks to stay perfect vs. Louisiana Tech 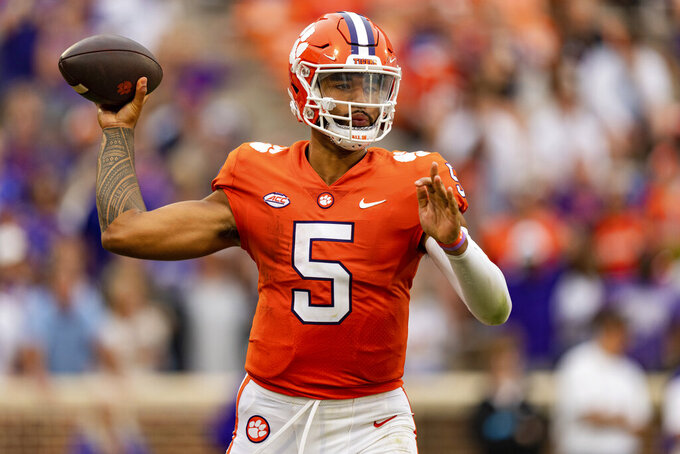 Line: Clemson by 33 1/2, according to FanDuel Sportsbook.

Clemson's spot in the national rankings and run back to the top in the Atlantic Coast Conference and national championship chase. The Tigers are gaining rhythm on offense, yet had holes exposed in their defense last week in a 35-12 win over FCS Furman. Louisiana Tech first-year coach Sonny Cumbie would have a signature win that would be a huge step for his building program.

Clemson QB DJ Uiagalelei vs. Louisiana Tech's defense. Uiagalelei was a wildcard entering the season who has steadily gained confidence the first two weeks. He had perhaps his best showing in two years last week, throwing for 231 yards and two touchdowns to beat Furman. Louisiana Tech gave up 34 points a game last season, 12th in a 14-team Conference USA.

Clemson: LB Trenton Simpson has been the most consistent bright spot on defense with a team-high 16 tackles. His speed and power are filling the loss of the Tigers' “Bruise Brothers” of James Skalski and Baylon Spector from last year.

Get ready for passing. Louisiana Tech's Cumbie played and was raised in Texas Tech's “Air Raid” attack and his quarterback Parker McNeil transferred from the Red Raiders to the Bulldogs this offseason. ... Clemson is working on a pack of streaks. It's won its last eight straight, the longest streak among Power Five schools. ... The Tigers have won 35 straight at home, dating to November 2016. ... Clemson has not trailed at any point in its last five games. ... The Bulldogs don't have a designated fullback on the roster, operating mostly out of the shotgun. ... Since joining Conference USA in 2013, Louisiana Tech has led the league with 222 takeaways. The Bulldogs have forced a turnover in 99 of 115 games during that span. ... Clemson is 27-2 in September games since 2015. Both those defeats occurred last September. ... These teams haven't played since 2006, a 51-0 win by Clemson.