No. 5 Clemson puts playoff hopes on line at Notre Dame 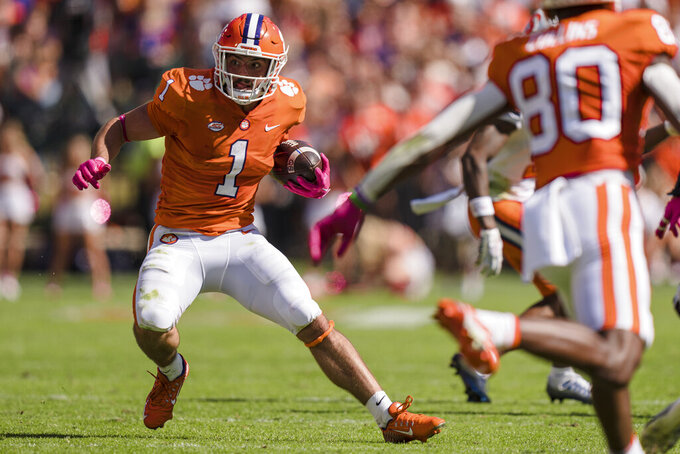 Clemson running back Will Shipley (1) runs with the ball in the first half during an NCAA college football game against Syracuse on Saturday, Oct. 22, 2022, in Clemson, S.C. (AP Photo/Jacob Kupferman)

Line: Clemson by 3 1/2, according to FanDuel Sportsbook.

Clemson and Notre Dame square off for the fourth time in five seasons and first since the Tigers beat the Irish in the 2020 Atlantic Coast Conference championship game. The Tigers are trying to keep their unbeaten season and playoff hopes intact. They sit No. 4 in the first College Football Playoff rankings. Notre Dame has won five of six since starting 0-2. A win would be first-year coach Marcus Freeman's biggest this season. The Fighting Irish can lock up a winning record at home.

Clemon's run defense vs. Notre Dame's three-pronged rushing attack. Clemson's big, deep defensive line has been virtually immovable this season. It allowed 2.6 yards per carry in September and 3.4 in October and ranks seventh nationally against the run (87.9 yards per game). Notre Dame's surge, meanwhile, has been fueled largely on the strength of its improving offensive line and more effective ground game. In October, the Irish ran for 213.3 yards per game.

Clemson: RB Will Shipley is Clemson's workhorse. He leads the Tigers with 892 yards from scrimmage and 10 TDs despite splitting carries with Phil Mafah.

Notre Dame: TE Michael Mayer owns every major school record for tight ends and leads the Irish with 47 catches for 580 yards and six touchdowns. If the Irish are going to have a balanced offensive attack, they'll need Mayer to come up big as Clemson tries to take him away.

Saturday marks the seventh meeting between Notre Dame and Clemson. …The Irish have won 26 straight regular-season games against ACC opponents … The Tigers had an open date last week and are 16-2 after a week off since Dabo Swinney became head coach in 2008. … The Irish rank last nationally in red zone defense, allowing a TD 85% of the time the opponent moves inside their 20.