No. 5 Clemson wins ACC Atlantic, back in title game 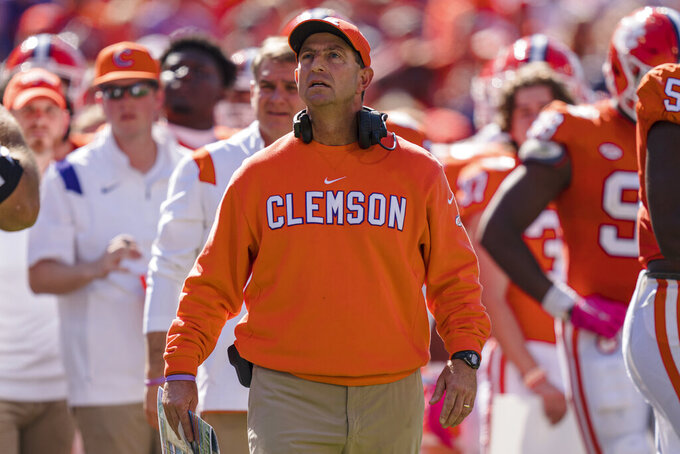 Clemson head coach Dabo Swinney looks on in the second half during an NCAA college football game against Syracuse on Saturday, Oct. 22, 2022, in Clemson, S.C. (AP Photo/Jacob Kupferman)

COLUMBIA, S.C. (AP) — No. 5 Clemson has clinched the ACC Atlantic Division and will return to the league's championship game on Dec. 3.

The Tigers won the division for a sixth time in eight seasons when No. 22 Syracuse fell at Pittsburgh 19-9 earlier Saturday. That defeat leaves Clemson, 6-0 in ACC play, two games in front of the Orange, No. 20 Wake Forest and No. 21 North Carolina State in the division with two league games remaining.

The Tigers have previously defeated Syracuse, the Demon Deacons and the Wolfpack this season.

Clemson had reached the ACC championship game six straight seasons — winning them all — from 2015-2020 until falling short last season.

The Tigers will likely face No. 17 North Carolina for the title. The Tar Heels hold a two-game lead in the Coastal Division with three ACC games left.