No. 5 Clemson's DJ Uiagalelei confident he's back to form 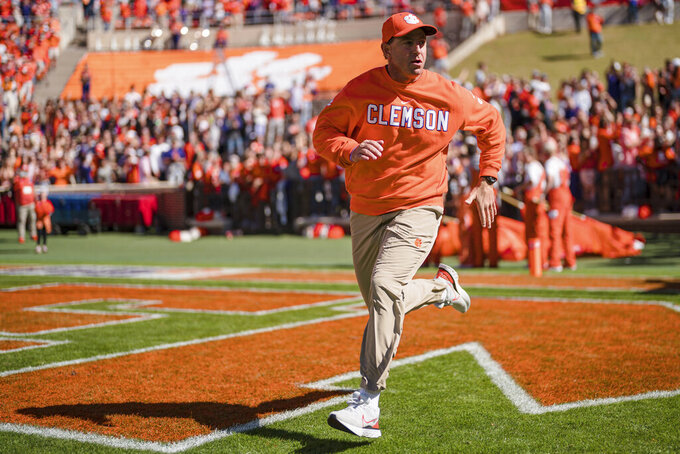 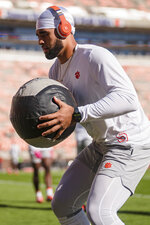 CLEMSON, S.C. (AP) — Refreshed from a week off, Clemson quarterback DJ Uiagalelei believes the site of his best showing in college will prove once more to doubters he's capable of leading the fifth-ranked Tigers to their championship goals.

Uiagalelei watched the end of Clemson's last game from the bench, coming out in the third quarter after throwing a pair of interceptions and giving up a fumble that turned into a 90-yard scoop and score as then-No. 14 Syracuse opened a 21-10 lead.

Backup Cade Klubnik sparked a 17-point rally in the second half as the Tigers (8-0) remained perfect with a 27-21 victory.

Uiagalelei, Klubnik and Clemson coach Dabo Swinney all stressed the switch was for the moment, not forever.

Uiagalelei gets to show there's no need for further change when the Tigers head to Notre Dame (5-3) on Saturday night.

“I felt like I figured out what I did wrong, stuff to work on,” he said. “Be able to improve that and make sure it doesn't happen again. I feel like I've definitely moved on from that and excited about playing Notre Dame."

Some of Uiagalelei's excitement this week surely comes from memories of his last visit in 2020. Uiagalelei was a freshman picked to start as national championship passer Trevor Lawrence missed his second game with COVID-19.

Uiagalelei threw for three touchdowns and 439 yards, the most ever by an opposing passer at Notre Dame Stadium.

The only drawback for Uiagalelei that day? The Tigers lost 47-40 in double overtime. “Yeah, I played great,” he said. “But the biggest thing for me was the loss.”

Uiagalelei hopes to right that defeat this time around. No one's lost confidence in him because of his showing against Syracuse, said Clemson receiver — and Uiagalelei's high-school teammate — Beaux Collins.

“He may be down about it Sunday, but when we come in Monday, he's in good spirits and has moved on,” Collins said. “I'm never worried about him.”

Neither, said Swinney, should Clemson supporters, some of whom have taken a wait-and-see approach to Uiagalelei's tenure since his uneven first year as a starter in 2021 when Clemson finished 10-3, yet ended its run of six straight Atlantic Coast Conference titles and College Football Playoff trips.

Uiagalelei has grown much since last season and Swinney thinks that will show itself down the stretch. He compared it to Major League Baseball teams watching their ace get tagged for more hits and runs than they usually give up.

“He's had some bad moments and snapped out of it,” Swinney said. “He's a totally different guy. Our expectation is for him to play his best game.”

Notre Dame coach Marcus Freeman was most impressed with Uiagalelei's demeanor after Klubnik came in.

“To watch that quarterback being the first one cheering the group on, to be the first one to clap for (Klubnik), that tells you they have a team,” Freeman said. “It's not a bunch of selfish individuals, it's a team.”

Don't look for Uiagalelei to approach his passing yards from the last visit to Notre Dame. He's only once in the 21 games since eclipsed 300 yards — when he threw for 371 yards and five touchdowns in a 51-45 overtime win at Wake Forest in September.

Where Uiagalelei had excelled this year, until Syracuse, is protecting the football. He had 10 interceptions with just nine touchdowns in 2021 and this year had vastly improved his accuracy with 17 touchdowns and only two picks in Clemson's first seven games.

Uiagalelei worked on ball security and keeping his passes from floating on him and into the hands of opposing defenders. He also took time last week to catch up on school, spend more time with his girlfriend and head to his home in California to visit with family.

The time away was therapeutic, he said, and put him in the right frame of mind to continue Clemson's chase for another league title and a spot in the College Football Playoff.

“It was good for me,” Uiagalelei said.