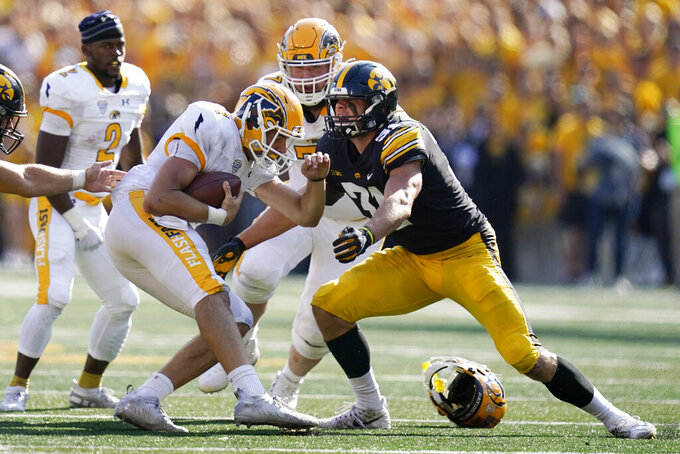 Line: Iowa by 23 1/2, according to FanDuel Sportsbook.

Iowa will try for its second 4-0 start in three years before returning to Big Ten Conference play at Maryland next week. This game gives the Hawkeyes a chance to build off the offensive momentum created last week against Kent State. Colorado State faces its highest-ranked opponent since losing 41-23 to No. 1 Alabama in 2017.

Iowa's biggest defensive challenge will be controlling TE Trey McBride, who can line up in the slot or as an H-back and is capable of stretching the field. The NFL first-round draft prospect already has 30 catches and is averaging better than 100 yards through three games.

Colorado State: DE Mohamed Kamara had 2.5 of the Rams' six sacks against Toledo last week and is part of a stout defensive line that should give Iowa's young offensive line a good test.

Iowa: LB Jack Campbell is having a breakout season with his fumble return for a touchdown against Iowa State, his career-high 11 tackles against Kent State last week and his team-leading 25 stops through three games. His average of 8.3 tackles is seventh in the Big Ten.

Iowa goes for a 10th straight win for the first time since opening its 2015 Rose Bowl season with 12 in a row. ... Iowa has played 25 straight games without surrendering 25 points, the longest streak among Power Five teams. ... This is the Hawkeyes' second game against a Mountain West Conference team. They beat Wyoming 24-3 in 2017. ... The Rams' most recent win over a ranked opponent came in 2002 when they beat No. 7 Colorado 19-14. ... The Rams are 1-11 against current Big Ten members. ... CSU OL Vincent Picozzi, a graduate transfer from Temple, will be making his 38th consecutive start as a collegian.