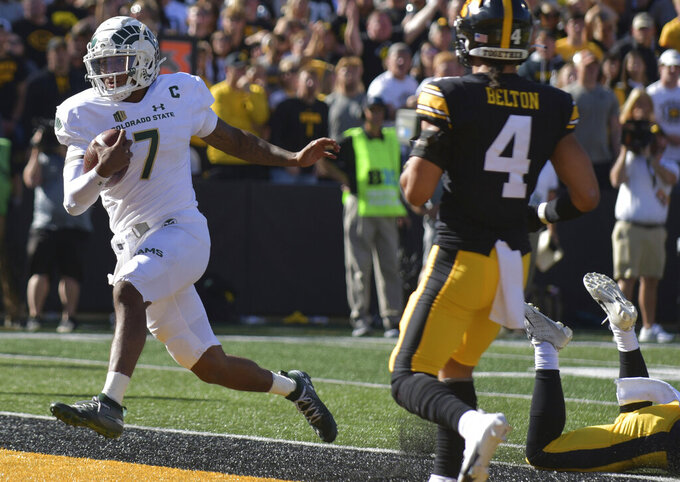 Colorado State quarterback Todd Centeio (7) runs for a touchdown during the first half of an NCAA college football game against Iowa, Saturday, Sept. 25, 2021, in Iowa City, Iowa. (AP Photo/Ron Johnson)

IOWA CITY, Iowa (AP) — Iowa made it through September undefeated with the remainder of the Big Ten schedule looming.

But it wasn’t easy for the No. 5 Hawkeyes to get to this point.

They opened the season with wins against ranked teams Indiana and Iowa State. A home win over Kent State followed.

Then came Saturday’s game against Colorado State, and it turned out to be the biggest challenge so far for the Hawkeyes.

Spencer Petras threw for 224 yards and two touchdowns as Iowa needed a second-half comeback to win 24-14.

The Hawkeyes (4-0), who trailed at halftime for the first time this season, won their 10th consecutive game, the program’s longest streak since winning 12 games to open the 2015 season. Iowa also has a 15-game nonconference winning streak, the longest current streak in the nation.

“I think our guys were trying today, and we had practiced well,” Iowa coach Kirk Ferentz said. “But it just wasn’t clicking for us.”

“We certainly got stressed, which is going to help us,” Ferentz said.

Iowa rallied with touchdowns on back-to-back possessions that took a combined four plays in the third quarter.

A fumble recovery by Iowa linebacker Jack Campbell at the Colorado State 6-yard line set up a touchdown run by wide receiver Tyrone Tracy Jr., on the next play that tied the game. Petras threw a 27-yard touchdown pass to tight end Sam LaPorta on the next possession to give Iowa a 21-14 lead.

“At halftime, we’re behind and not playing great,” Ferentz said. “A lot of that was our own doing. But our guys rallied and just kept playing.”

Campbell, who had 18 tackles, led Iowa’s defense, which held Colorado State to just 32 yards on 19 plays in the third quarter.

“It’s just about never giving up on a play, no matter how far down the field it is,” Campbell said.

The Hawkeyes have a streak of 26 consecutive games in which they have held their opponents to 24 points or less, the longest current streak among Power Five schools.

“We knew we were playing an elite defense,” Colorado State coach Steve Addazio said. “We knew yards were going to be hard to come by.”

Petras, who had a 43-yard touchdown pass to freshman receiver Keagan Johnson in the first half to give Iowa an early 7-0 lead, had his streak of 23 quarters without an interception end in the second quarter when Colorado State cornerback Robert Floyd wrestled away a pass intended for Tracy and returned it 62 yards. That set up Todd Centeio’s 3-yard touchdown pass to Gary Williams.

“Certainly that interception at the first half that I threw and them going right back down and scoring, that’s huge adversity,” Petras said. “We’re down seven at the half, but I thought we kept fighting, and it wasn’t pretty, but that’s football. That’s going to happen. I am really happy and proud of our team for bouncing back and coming out with a win.”

“You can’t stop the run better than that,” Addazio said.

“It hurts,” said Colorado State tight end Trey McBride, who led the Rams with six catches for 59 yards. “This was a team we should have beat.”

Instead, the Hawkeyes just kept winning.

“Again, it’s a little adversity and we fought through it and that’s what good teams do,” Petras said. “If something doesn’t go right, you just keep riding the ship and keep chopping.”

Colorado State running back David Bailey, the Rams' leading rusher, went out with a leg injury after his first carry and didn't return. “That's a huge hit for us to take,” Addazio said. “David is a big-time player, and that hurts.” A'Jon Vivens led the Rams with 45 yards on 17 carries.

LaPorta received an unsportsmanlike penalty when he spun the ball in the end zone after his touchdown. “It's one of those things I regretted as soon as I did it, I saw the ref reaching for his flag,” LaPorta said. “At the end of the day, we're having fun out there. I was celebrating. I'll learn next time.”

The Hawkeyes, who had 179 yards in the first half but could only get seven points, showed they could come back from their early issues as they get back into Big Ten play next week at Maryland. “I'm happy we won, don't get me wrong,” Campbell said. “But we've got a lot of things we can get better at.”

Colorado State controlled the first half, but couldn't sustain the momentum. “I don't like our record, it sticks with you,” Addazio said. “But our team, I like where we are.”

The Hawkeyes, who have their highest ranking in the AP poll since 2015, should hold steady despite the first-half struggle.

Iowa: At Maryland on Friday.