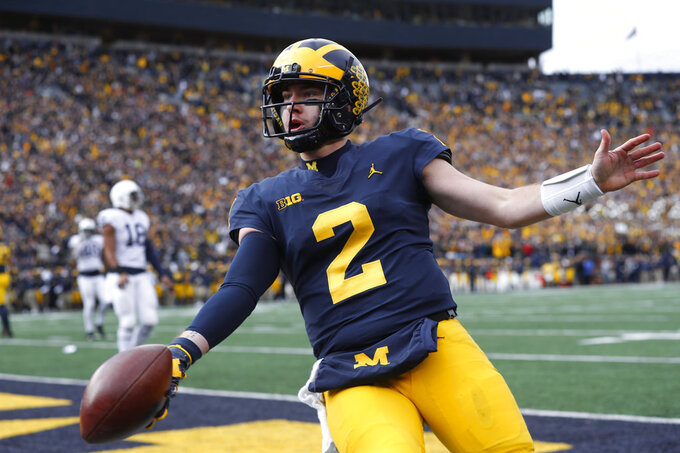 The Wolverines wanted to win big, getting revenge after getting routed and humiliated against the Nittany Lions last year.

Michigan got what it wanted.

Shea Patterson accounted for three touchdowns and the Wolverines put together a dominant performance on defense in a 42-7 rout against Penn State on Saturday.

"If we had a chance, we were going to run it up, too," Patterson said.

The Wolverines (8-1, 6-0 Big Ten, No. 5 CFP) moved a step closer toward their goals of winning a conference championship for the first time since 2004 and earning their first spot in the College Football Playoff.

"We're the team to beat in the Big Ten," proclaimed defensive end Chase Winovich , who has said the team is on a revenge tour to beat the four conference teams it lost to last season. "That's not a controversial statement. It's just, I think, that's a fact at this point."

Jim Harbaugh did what he could to prevent Penn State from scoring at all, challenging a call on its last drive and calling timeout twice.

Michigan, clearly, was motivated to beat the Nittany Lions after they won 42-13 last year and tried to score a touchdown on its last play.

"It was personal right from the start," Karan Higdon said.

Higdon ran for 132 yards and a score that put the Wolverines up 35-0 early in the fourth quarter. He has run for 100-plus yards in seven straight games, one shy of the school record set by Mike Hart in 2007.

"I think it's time for him to get nominated for some big-time awards," Patterson said.

Michigan's defense held Penn State to 186 yards and forced three turnovers, including Tommy Stevens' interception that was returned 62 yards by Brandon Watson for its second score in the final minute of the third quarter. It was Watson's second pick-6 of the season, joining Lance Dottin (1991) as the only players to do that twice in a year.

The Nittany Lions started banged-up quarterback Trace McSorley and he was 5 of 13 for 83 yards with an interception and a fumble. McSorley played with an injured right knee in last week's win against Iowa. He shared time and rotated with Stevens, who was 3 of 4 for 35 yards. Stevens scored on an 8-yard run late in the game.

"When (Stevens) threw the interception there, we felt like we needed to put Trace back in," Franklin said. "Obviously, you make the decision and you probably could've made the change a little bit earlier. The way they were pressuring us and loading the box, having the ball with Trace's mobility was critical."

Patterson was 11 of 17 for 144 yards with two touchdown passes, a 23-yard throw to Donovan Peoples-Jones in the second quarter and a 7-yard strike to Zach Gentry. He ran 11 times, often on read-option plays , for 42 yards, including a 1-yard TD midway through the first quarter.

"With Shea, they've added another element to their package, getting on the perimeter," Franklin said.

Patterson was replaced in the fourth quarter by redshirt freshman Dylan McCaffrey, who broke his collarbone.

"He was doing so well," Harbaugh said. "I'm a little sad about that."

Michigan defensive end Rashan Gary returned from a three-game absence because of an injured right shoulder and receiver Tarik Black took a big step in his comeback from foot surgery by catching a touchdown pass that was negated by a penalty.

Penn State: Franklin, in his fifth season, will be challenged to provide an upbeat outlook about the state of his program after losing for the third time in five games and getting routed as a ranked team.

Michigan: Harbaugh's fourth team is positioned to have a special season. The Wolverines have a pair of tuneups at Rutgers and against Indiana to get ready to close the regular season at No. 8 Ohio State.

Michigan will likely move up a spot because No. 4 LSU lost to top-ranked Alabama. The Nittany Lions will fall toward the bottom, or out, of the poll.

Michigan: Plays at Rutgers on Nov. 10.