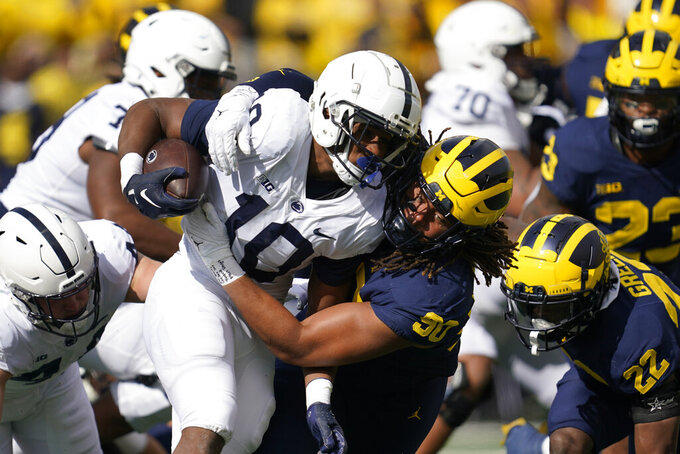 Donovan Edwards ran for a go-ahead, 67-yard touchdown and Blake Corum had a 61-yard run for a score on consecutive snaps in the third quarter as the fifth-ranked Wolverines pulled away and beat No. 10 Penn State 41-17 on Saturday.

The Wolverines (7-0, 4-0 Big Ten) finished with 418 yards rushing, gaining 7.6 yards per carry, against a team that was giving up fewer than 80 yards rushing per game to rank among college football's leaders.

Michigan was dominant for much of the first half, but led by just two points because it settled for field goals after stalling at the 5 twice and at the 11 once.

Penn State went ahead again after the opening drive of the third quarter, but Edwards answered with a 67-yard run on the next play. Edwards darted to the right behind excellent blocking to get to the sideline and used his speed on a cutback that gave the Wolverines a 24-17 lead with a 2-point conversion.

“Seeing the gap open up like it did, I knew it was going to be his big gain, but his cut at the end was just crazy," Michigan quarterback J.J. McCarthy said.

On the ensuing drive, Franklin went for it on fourth-and-6 from the Michigan 39 and asked Sean Clifford to attempt a difficult pass to Parker Washington downfield and toward the sideline that fell incomplete.

“You get to a point form a score perspective, you're trying to win the game," Franklin said.

On the next play, Corum sprinted through a huge hole and broke away on a 61-yard run that gave the Wolverines a two-touchdown lead midway through the third.

Edwards scored twice and had career highs with 16 rushing attempts and 173 yards on the ground. Corum finished with 166 yards and two touchdowns on 28 carries.

“The offensive line knows that if they give Blake and Donovan space, any kind of crack, they’re going to make the most of it," Harbaugh said.

Michigan’s Jake Moody made his fourth field goal early in the fourth for a 34-17 lead.

McCarthy was 17 of 24 for 145 yards with an interception that was deflected by an end, caromed off a defensive tackle and returned 47 yards by linebacker Curtis Jacobs to give Penn State a 14-13 lead with 4:27 left in the first half. McCarthy had a career-high 57 yards rushing.

Clifford was 7 of 19 for 120 yards and was replaced due to an injury by freshman Drew Allar, a five-star recruit, with a 17-point deficit in the fourth.

Penn State: The run defense that helped the team get off to an undfeated start was exposed.

“It hurts any time a team rushes for that amount of yards,” Penn State defensive tackle PJ Mustipher said. “As a defensive line, we pride ourselves on stopping the run and we didn’t do that.”

Michigan: Harbaugh's team no longer has to answer questions, or hear criticism, about beating inferior opponents.

“There’s still things that keep us humble," he said.

Michigan running back Mike Hart, who left last week’s game at Indiana with a medical emergency, returned to coach against Penn State.

Michigan slipped a spot in this week's AP Top 25 despite winning by 21 points at Indiana, but might move back up a little with the impressive win. The Nittany Lions' lopsided loss will likely lead to them plummeting in the poll.

Penn State: Hosts Minnesota and No. 2 Ohio State over the next two weeks, giving it a chance to stay in the Big Ten race.

Michigan: After an open date, plays rival Michigan State at home aiming for its first win over coach Mel Tucker in three years with the Paul Bunyan Trophy at stake.

“We want Paul back," McCarthy said.