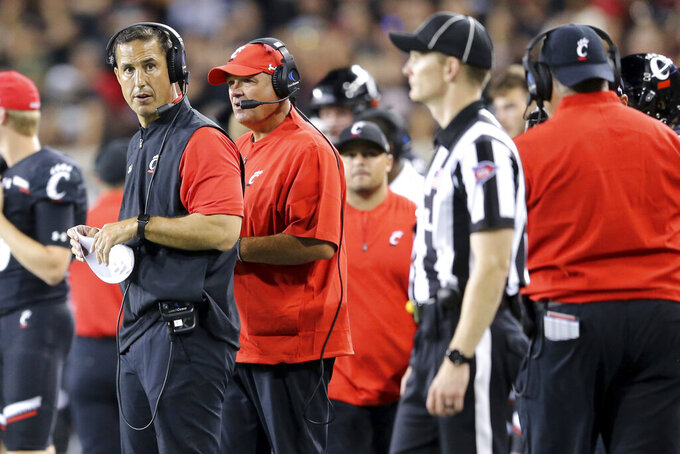 Cincinnati coach Luke Fickell looks down the sideline during the second half of the team's NCAA college football game against UCLA on Thursday, Aug. 29, 2019, in Cincinnati. (Kareem Elgazzar/The Cincinnati Enquirer via AP)

COLUMBUS, Ohio (AP) — Former Buckeye Luke Fickell returns to Ohio Stadium for the first time since he took the Cincinnati job in 2016.

There are plenty of story lines and Fickell is at the center. The third-year Bearcats coach played five years at Ohio State in the early 1990s and was a member of the coaching staff for a 16-year stretch, including two national championships.

After a turnaround 11-2 season in 2019, Cincinnati beat UCLA in week one and comes to Columbus full of confidence. No. 5 Ohio State is eager for a more rigorous game after routing out-manned Florida Atlantic .

Even though Ohio State is more than a two-touchdown favorite, the in-state rivalry game is one of the more intriguing matchups so far in the 2019 season.

"There will be no feelings," said Fickell, who played nose guard for OSU. "I think it's unique. I don't want to avoid the question and say you don't think about it. But the reality is that as a competitor, you wipe your emotions away no matter what the situation. That's the only way to be successful in this type of situation in particular."

Ohio State coach Ryan Day also downplays the matchup with Fickell, whom he has met but doesn't know well. Fickell had moved on to Cincinnati before Day came aboard as an assistant to Urban Meyer in 2017.

"I think it's a very strong program, in great shape," Day said. "So we know they are going to come in here hungry. Being in the same state, we know that means a lot."

Other things to know ahead of Saturday's game:

Fickell and Meyer talked about calling off the game in the first few weeks after Fickell was hired at Cincinnati, which was in a down time. But their discussion never got far.

"We never really addressed it much after that," Fickell said. "I think that was one of those things in the first few weeks: Maybe we don't want to do this."

"We know how big of a game this is for them, just as it is for us," Ohio State offensive lineman Wyatt Davis said. "Looking at the film, especially what they did against UCLA, they're a go-hard team. And when they come in the 'Shoe they're definitely going to be bringing all types of energy."

Day brought a twist to the Ohio State offense this season with new quarterback Justin Fields taking some snaps under center. During Meyer's tenure, it was strictly shotgun.

Day was cagey about it leading up to the opener.

"I think it gives us some versatility and flexibility in terms of what we're doing," Day said.

Jashon Cornell has moved back and forth between defensive tackle and defensive end throughout his Ohio State career. He started this season as an interior lineman but played on the edge last week because of injuries to other defensive ends.

The fifth-year player responded with his best game as a Buckeye, logging a career-high high four tackles, two of them for a loss, a sack and a forced fumble.

"We always knew Jashon had that in him," defensive end Chase Young said.

Cornell said he would be back inside this week with the return of ends Tyler Friday and Tyreke Smith.

Fickell didn't make his players available to reporters this week, hoping to avoid a repeat of their worst showing last season. In their biggest game, the Bearcats were blown out by Central Florida 38-13.

"It has nothing to do with us playing Ohio State 100 miles down the road," Fickell said. "This is a big stage, and what I want to do is not what we did last year. Maybe we got distracted in the UCF game. Just focus on ourselves, focus on what we can do and not over-talk it."