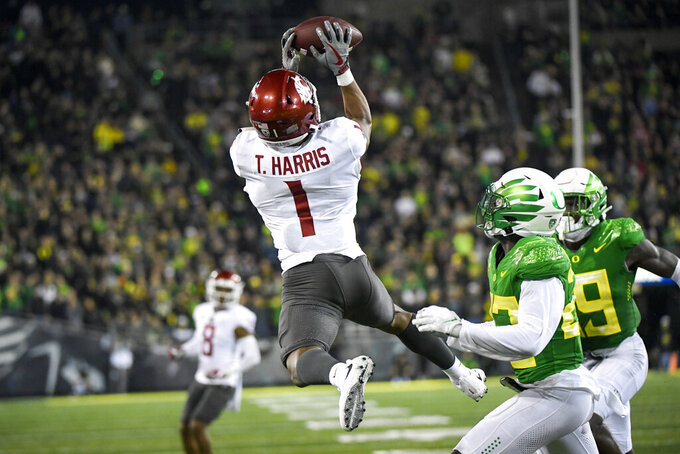 EUGENE, Ore. (AP) — Oregon defensive end Kayvon Thibodeaux says it's at that point of the season where every team wants to knock off the Ducks.

Anthony Brown Jr. threw for 135 yards and a touchdown while rushing for 123 yards and another score as No. 5 Oregon beat Washington State 38-24 on Saturday night.

Oregon, ranked No. 3 in the College Football Playoff rankings, has won five straight and extended its winning streak at Autzen Stadium to 18 straight games, including 14 straight victories at home over Pac-12 opponents.

“Every game is a playoff game," Thibodeaux said. “Us having this target on our backs, it makes every team want to play their best. You know, one thing that we had a problem with was playing down to teams. And now I feel like we’re in that mode where teams have to play up to us.”

Oregon (9-1, 6-1 Pac-12) needed to win and for Stanford to beat Oregon State up the road in Corvallis earlier on Saturday to clinch the Pac-12 North. The Beavers didn't hold up their end, winning 35-14 over Stanford.

Washington State (5-5, 4-3) tied the game at 14 before halftime but Oregon pulled away in the third quarter. The loss snapped a four-game winning streak over Pac-12 opponents for the Cougars, who fell to BYU on Oct. 23 in a midseason nonconference game.

The Cougars still need one more win to become bowl eligible and perhaps redeem a season that has been marked by turbulence. Washington State dismissed head coach Nick Rolovich on Oct. 18 after his refusal to get vaccinated against COVID-19.

Saturday's game got off to a strange start. Washington State's second play from scrimmage appeared to be a 77-yard touchdown pass from Jayden de Laura to Calvin Jackson Jr. But on review, Jackson stepped out of bounds at the Oregon 7-yard line. On the next play, de Laura fumbled out of the end zone for an Oregon touchback.

Travis Dye plowed his way into the end zone from a yard out to give the Ducks a 7-0 lead. Verone McKinley III got his fifth interception of the season and three plays later Dye scored on an 11-yard pass from Brown.

The Cougars closed the margin on de Laura's 14-yard pass to De'zhaun Stribling midway through the second quarter. De Laura's 1-yard keeper with 11 seconds left in the half tied it at 14.

Oregon scored on Brown's 17-yard scramble on their first series of the second half to pull back in front. The Ducks extended the lead on Camden Lewis' 22-yard field goal.

It appeared that Washington State's George Hicks III recovered a fumble by Brown in the end zone early in the fourth quarter and ran it back 50 yards. After review, the play stood.

De Laura hit Travell Harris with a 38-yard pass to get to the Oregon 11, but the Ducks' defense held and the Cougars settled for Dean Janikowski's 34-yard field goal to make it 24-17.

“I think it was another chance for us to kind of show our resilience and show that we’re gonna keep coming,” Thibodeaux said. “I feel like we’ve trained for sudden changes. Things happen in this football so just being able to come back and play the next play, that's all you have to do.”

Thibodeaux, considered a top pick in the 2022 NFL draft if he chooses to go pro, had a pair of sacks and six tackles, including two tackles for loss.

Dye ran for 88 yards and a score, and had 25 yards receiving and another TD. Oregon had more than 300 yards on the ground for the second straight game.

De Laura threw for 280 yards and two touchdowns for the Cougars. He was intercepted twice.

Oregon: Last year in Pullman, the Cougars led 19-14 at halftime but the then-No. 11 Ducks pulled away in the second half, with Dye catching two second-half touchdown passes, to win 43-29.

The Ducks have 15 takeaways at home this season. It was the fifth game of the season with at least three takeaways.

“Being in the secondary against Washington State, you know they're going to pass the ball,” McKinley said. ”We were prepared."

Cristobal said: “I’ll tell you what, it was seven nothing and Verone gets up pick. That was another huge bolt of energy to our sideline our offensive guys fed off of that big time. And that’s what Verone does. Verone’s a game changer.”