No. 5 Vols looking to stay in playoff race hosting Missouri 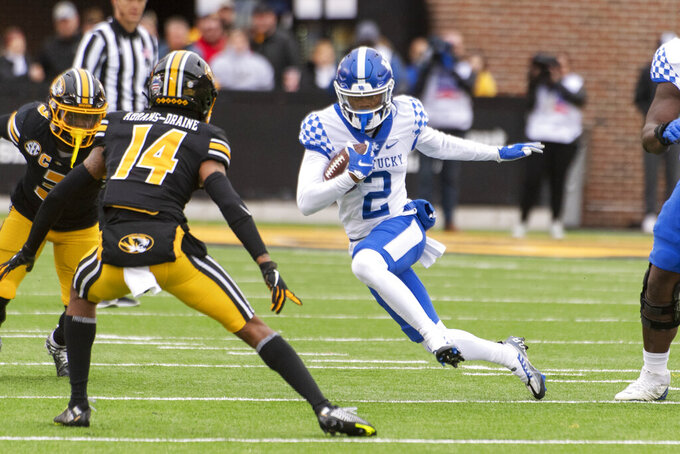 KNOXVILLE, Tenn. (AP) — Fifth-ranked Tennessee still has plenty left to play for if the Volunteers take care of business down the stretch.

First up is trying to finish off a perfect record at home Saturday against Missouri. That's all coach Josh Heupel wants his team focused on.

“There’s nothing we can control other than who we are,” Heupel said. “How we approach it and how we go play and compete.”

Last week’s 27-13 loss to top-ranked Georgia all but ended Tennessee’s bid for the Southeastern Conference championship. But a resume that includes wins over five AP Top 25 teams will go a long way toward earning the Vols (8-1, 4-1 SEC, No. 5 CFP) a spot in the College Football Playoff.

That loss provided the Vols with an important lesson for their next big game in hostile territory. Tennessee wraps up the season visiting South Carolina and Vanderbilt.

“We won’t let the moment get too big for us,” Vols defensive linemen LaTrell Bumphus said. “At times, that might have been an issue.”

Missouri (4-5, 2-4) followed up a road win at then-No. 23 South Carolina with a 21-17 loss last weekend to Kentucky. That loss featured a bizarre roughing the punter penalty late, costing the Tigers a short-field opportunity for victory.

The snap was well over the head of Kentucky's punter and rolled to the 5-yard line where the punter tried a desperation kick only to be tackled by Missouri’s Will Norris. The punter was ruled to be within the tackle box and Norris was called for roughing the punter, giving Kentucky a first down.

The SEC office reviewed the penalty, not that Missouri coach Eli Drinkwitz wanted to talk about it.

Missouri still has a chance at becoming bowl eligible for a third straight season with Drinkwitz. This is the Tigers' last road game, and they are 3-2 in Knoxville in this series; Tennessee has won three straight over the Tigers.

“It's a challenging scheme combined with challenging players, and that's really when it's at its best,” Drinkwitz said of the Vols' offensive scheme that Heupel once ran at Missouri as coordinator in 2016 and 2017.

Quarterback Hendon Hooker and wide receiver Cedric Tillman will be among the Vols taking the field at Neyland Stadium for the final time Saturday. They have a chance to finish off a perfect home record at 7-0, which would be the first since Tennessee also went 7-0 in 2007.

Tennessee has outscored opponents 321-128 this season at home and have won eight straight dating to last season. That's the longest home winning streak since the Vols won nine straight between 2006 and 2008.

The Vols still have the nation's top offense averaging 523.7 yards per game and the top passing efficiency at 188.61. However, Tennessee dipped to second nationally scoring 45.3 points a game and averaging 335.8 yards passing per game.

Not only did the loss to Georgia snap the Vols' perfect start, some offensive streaks also ended in that game. Hooker’s nation-best streak of games with at least one touchdown pass ended at 20. Wide receiver Jalin Hyatt's stretch of four straight games with multiple TD receptions also ended in the loss. And the Vols didn't have a wide receiver with at least 100 yards receiving for the first time after seven straight games.

The Tigers will be limping into Neyland Stadium on the offensive line. Versatile lineman EJ Ndoma-Ogar was injured in the loss to Kentucky with Hyrin White ruled out for the season. Missouri has used eight different combinations along the offensive line.

Missouri ranks fourth in the SEC in several defensive categories. The Tigers are giving up just 21.4 points per game, allowing 86.3 yards rushing per game, 192.4 yards passing per game and in total defense at 304.1 yards per game. The Tigers' four SEC losses have been by a combined 18 points.