No. 6 Florida focused on much more than just Vanderbilt 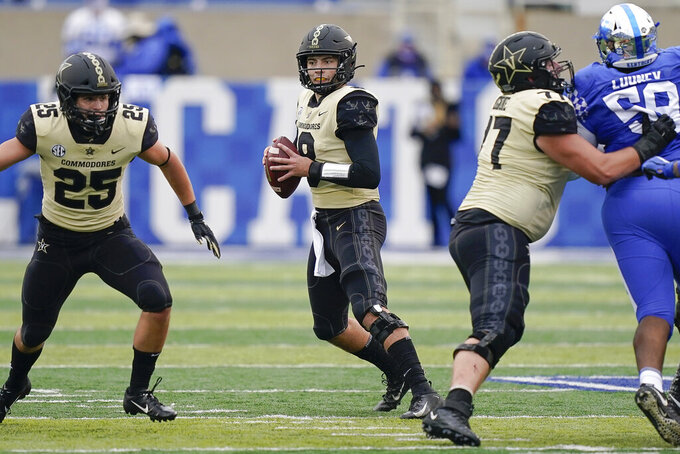 Vanderbilt quarterback Ken Seals (8) scrambles with the ball during the second half of an NCAA college football game against Kentucky, Saturday, Nov. 14, 2020, in Lexington, Ky. (AP Photo/Bryan Woolston)

NASHVILLE, Tenn. (AP) — Dan Mullen sees no reason for sixth-ranked Florida to overlook winless Vanderbilt, not with what is on the line for the Gators this season.

The Gators (5-1) sit atop the Southeastern Conference's Eastern Division with a spot awaiting them in Atlanta on Dec. 19 in the league championship game and possibly a berth in the College Football Playoff — if they keep winning. They're putting up the kind of offensive numbers seen when Florida won its first national title.

“If we want to be a great team, we have to get better,” Mullen said. “So not only you know, is that focus on your opponent, that focus is on yourself as well. If not, I guess I’ll put on a cheerleading outfit and get on the sidelines and start trying to motivate us that way.”

Playing only a 10-game schedule also should be more than enough to get players' attention on Saturday, even if the Gators have dominated the series against Vanderbilt. Florida is 41-10-2 against the Commodores with six straight wins.

“Shouldn’t need any more motivation than that,” Mullen said of the truncated schedule.

Vanderbilt (0-6) has never gone winless through an entire season, and these Commodores have a trio of one-possession losses. Coach Derek Mason said they know how dynamic the Gators are but have to focus on playing together themselves.

“The challenges are great, but the opportunity's greater,” Mason said. “Definitely look forward to seeing this group on Saturday.”

Florida quarterback Kyle Trask has an SEC-best 28 touchdown passes through six games, and he's spreading the ball around for an offense that's in the top six nationally averaging 371.7 yards passing and scoring 45.8 points a game.

Mason compared Trask to facing Heisman Trophy winner Joe Burrow with LSU a year ago. Vanderbilt gave up six TD passes to Burrow in a 66-38 loss, and the Commodores gave up 363 yards and three TDs to Trask last year in the Swamp in a 56-0 loss to Florida.

“I think he’s much better,” Mason said of Trask. "I think he’s got command of the offense. I think he knows where to go with the football. He’s probably got as talented a weapons crew as you’re going to see in the SEC”

Trask says the Gators heard the chatter that playing Arkansas last week could catch Florida off guard coming off a big win over Georgia to grab control of the SEC East. Trask says they did a good job ignoring the noise, and Florida routed Arkansas 63-35.

Now the challenge is keep it up in a stadium where only parents and family will be allowed. Florida will have up to 500 tickets.

“We haven’t really been used to having a lot of fans anyways, so we’ve been having to create our own energy for every single game,” Trask said. "It’s just going to be another week of creating our juice from the inside out.”

Vanderbilt is getting right guard Drew Birchmeier back after he missed the past two games, and running back Ja'Veon Marlow, who has played only twice this season, also will be available. Running back Keyon Henry-Brooks was hurt in last week's 38-35 loss at Kentucky. He leads the Commodores with 147.2 all-purpose yards a game.

Mason is the longest-tenured black head coach in SEC history in his seventh season, and he's two wins from tying for the fifth-most wins by an Vanderbilt coach with 27. But Vanderbilt has four games remaining to avoid the first winless season in school history. Mason said he hasn't talked with anyone about his future.

“They understand week to week we're going to put the best product out there that we can,” Mason said. “And I feel comfortable about like how I continue to lead this team and that's what we're going to do. ... I haven't had any other conversations other than our numbers and are we healthy and can we play this week.”