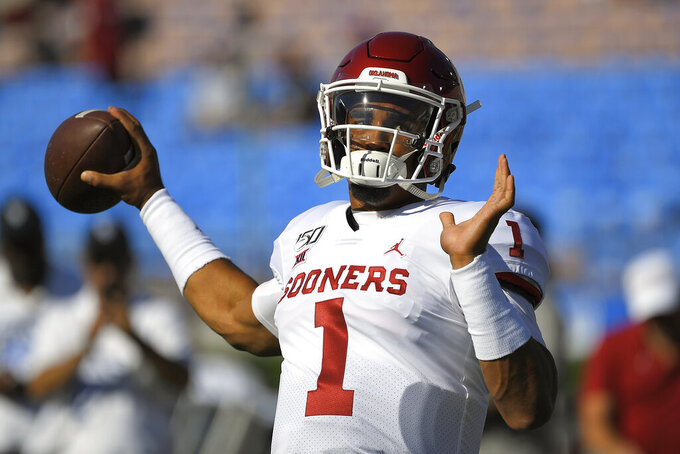 Oklahoma has lost ground in the AP poll the past two weeks, despite remaining undefeated. Without a significant non-conference win, there is no room for a loss — or even for a bad day. The Sooners need to win convincingly to maintain consideration among the nation's elite. Oklahoma quarterback Jalen Hurts needs another strong outing to remain among the Heisman Trophy favorites.

Oklahoma's running game vs. Texas Tech's run defense. Oklahoma ranks second nationally in rushing with 324.3 yards per game. The Red Raiders will need to contain Hurts as a runner. He averages 124.3 yards per game, 10th nationally. If the Sooners establish the run, Oklahoma receivers Charleston Rambo and CeeDee Lamb could eventually take advantage when the Sooners shift gears and look for big plays in the passing game.

Texas Tech: QB Jett Duffey. He's Tech's most experienced active quarterback now that Alan Bowman is out with a shoulder injury. Bowman leads the Big 12 with 340 yards passing per game. The Sooners will have to deal with Duffey, a dual threat who had success against them last year.

Oklahoma: RB Kennedy Brooks. The Sooners' preseason All-Big 12 running back has gotten off to a slow start, but he's due for a breakout game. He did most of his damage last season during Big 12 play.