No. 6 Oklahoma, No. 16 Washington advance to title games 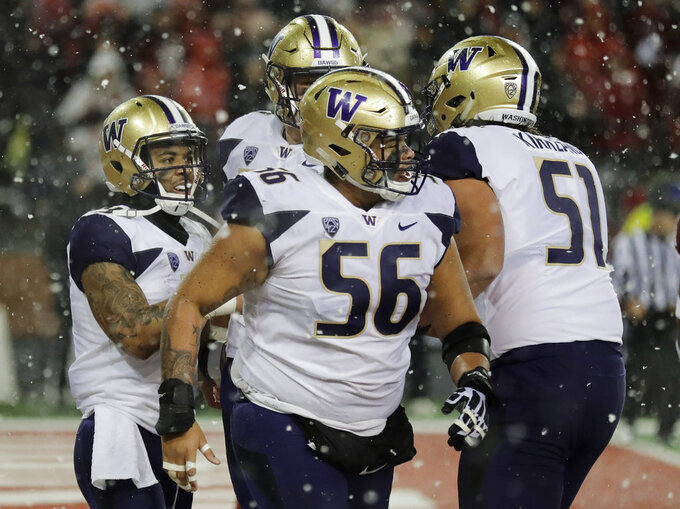 MORGANTOWN, W.Va. (AP) — Kyler Murray threw three touchdown passes and ran for another score, No. 6 Oklahoma scored two defensive TDs and the Sooners beat No. 12 West Virginia 59-56 Friday night for a spot next week in the Big 12 championship game.

The Sooners (11-1, 8-1, No. 6 CFP) survived a wild and mostly defenseless affair that featured 1,372 yards of offense to earn a rematch Dec. 1 in Arlington, Texas, against No. 11 Texas, which beat Kansas earlier Friday.

Murray finished 20 of 27 for 364 yards and converted a late fourth down to seal a matchup of Heisman Trophy hopefuls. West Virginia's Will Grier threw for four touchdowns and a career-high 539 yards on 32 of 49 passing. But Grier lost two fumbles, both of which were returned for touchdowns.

Oklahoma linebacker Caleb Kelly had a 12-yard TD return in the second quarter.

On a blustery cold night with snow falling and blanketing the turf at Martin Stadium, Gaskin found enough traction to carry the Huskies into the Pac-12 title game and ruin yet again the title hopes of Washington State.

It was Washington's sixth straight win over the Cougars and the third straight year the Huskies denied Washington State the North crown. Gaskin rushed for 170 yards and three touchdowns, a year after running for 192 yards and four scores against the Cougars.

He was the best player on the field on a night Washington needed its senior ball carrier to be just that. The Huskies (9-3, 7-2 Pac-12) will face Utah in the conference title game next Friday in Santa Clara, California. The winner will earn a spot in the Rose Bowl.

Washington State (10-2, 7-2) carried the Pac-12's last remaining hope of finding a way into the College Football Playoff, but the Air Raid was mostly grounded by a combo of blowing snow and Washington's sticky secondary. Gardner Minshew was 26 of 35 for 152 yards, but his longest pass to a wide receiver went for 11 yards.

The Washington band did not perform, a day after one of its three charter buses rolled onto its side while traveling from Seattle. The Washington State band performed the Washington fight song "Bow Down to Washington" during a pregame performance on the field.

Milton hurt his right knee when he was tackled at the end of a 5-yard run in the second quarter. Darriel Mack Jr. replaced him and may make his second start of the year when UCF (11-0, 8-0, No. 9 CFP) faces Memphis next week in the American Athletic Conference title game.

Players from both schools, which are located about 100 miles apart via Interstate 4, kneeled on one knee while a cart was rolled onto the field and Milton received medical attention in front of the South Florida bench. The entire UCF squad left their sideline at one point to form a crowded circle around Milton, who was placed on the cart and taken to the locker room and later a nearby hospital.

Milton completed 5 of 10 passes for 86 yards, including a 14-yard scoring throw to Gabriel Davis for a 7-0 lead. The Knights kicked a field goal on the first play after the quarterback departed to make it 10-0.

Greg McCrae McCrae scored on runs of 40, 39 and 31 yards, with the second of the three TDs re-establishing a 14-point after South Florida briefly pulled to 17-10 on Johnny Ford's 34-yard catch-and-run. McCrae finished with 181 yards rushing on 16 carries for the Knights, who amassed 558 yards total offense and have scored at least 30 points in 24 consecutive games.

LAWRENCE, Kan. (AP) — Sam Ehlinger threw for two touchdowns and ran for a score and Texas held off Kansas to reach the Big 12 title game.

The Longhorns opened a 24-7 lead on Cameron Dicker's 34-yard field goal in the fourth quarter, but the lowly Jayhawks responded with Peyton Bender's 31-yard touchdown pass to Daylon Charlot and recovered the ensuing onside kick.

After Gabriel Rui made it a one-score game with a 45-yard field goal with 1:37 remaining, Kansas was unable to recover another onside kick and Texas (9-3, 7-2, No. 15 CFP) closed out its third consecutive victory. Tre Watson finished with 79 yards on 14 carries as Texas continued its strong second season under coach Tom Herman.