No. 6 Oregon aiming to keep CFP hopes against Arizona State 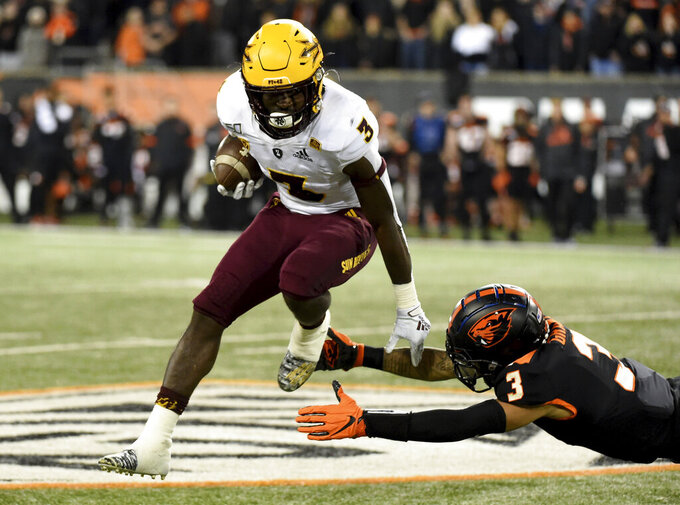 The Ducks wrapped up the Pac-12 North title with a 34-6 home win over Arizona and are still in the mix for the College Football Playoff at No. 6 in the latest rankings. To have a shot at the CFP, the Ducks cannot afford a slipup on the road against an Arizona State team that’s lost four straight. The Sun Devils need one victory in their final two games to become bowl eligible for the second straight season under coach Herm Edwards.

Oregon QB Justin Herbert vs. Arizona State’s defense. Herbert has been superb during his senior season, throwing for 2,662 yards and 28 touchdowns with three interceptions while completing 70% of his passes. He did lose a target last weekend, when freshman receiver MyCah Pittman broke his arm. He will miss six weeks. Arizona State has struggled getting pressure on opposing quarterbacks and its 115th in the FBS in passing defense, allowing 270.9 yards per game.

Oregon: G Shane Lemieux. The 6-foot-4, 216-pound senior was named the Pac-12 offensive lineman of the week after leading the Ducks with a season-high seven knockdowns against Arizona. Lemieux did not allow a hit, hurry or pressure in 67 snaps and had a 97% grade by Oregon’s coaches.

Arizona State: RB Eno Benjamin. The Sun Devils have been looking to get the junior untracked after he ran for 1,642 yards and 16 TDs last season. The hard-running Benjamin has four 100-yard games this season, but his 801 yards rushing is fifth in the Pac-12 after he was fifth nationally in 2018.