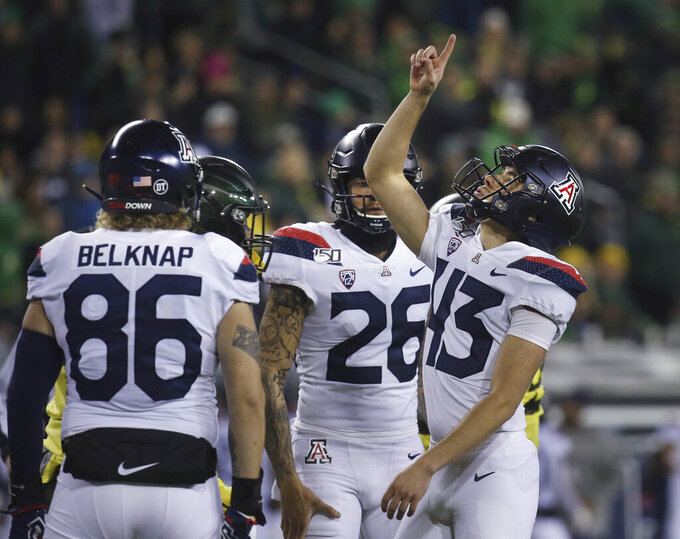 EUGENE, Ore. (AP) — In securing a spot in the Pac-12 title game, Justin Herbert marveled at how far Oregon had come since his freshman year.

Herbert threw for 333 yards and four touchdowns and No. 6 Oregon won its ninth straight game and clinched the Pac-12 North with a 34-6 victory over Arizona on Saturday night.

The senior quarterback recalled 2016, when Oregon finished last in the division.

"It’s really cool, it’s something that — the 4-and-8 season we didn’t see coming — so it’s a sign of all the hard work that we’ve put in, and it’s a great opportunity for us," Herbert said.

Graduate transfer Juwan Johnson caught five passes for 93 yards and a score for the Ducks (9-1, 7-0 Pac-12). Oregon hasn’t won seven straight in conference play to start a season since 2012, and no Pac-12 team has started 7-0 in league play since Stanford in 2015.

The Ducks, ranked sixth in both the College Football Playoff rankings and the AP Top 25, haven’t dropped a game since the season-opening loss to Auburn.

With the victory, Oregon wrapped up the berth in the conference championship game on Dec. 6 in Santa Clara, California. The Ducks’ opponent from the league’s South Division has yet to be determined.

“The best part about it is our guys still feel like we haven’t played our best football,” coach Mario Cristobal said.

The loss slimmed Arizona’s chances of bowl eligibility. At 4-6 overall and 2-5 in conference, the Wildcats face No. 8 Utah (No. 7 CFP rankings) next Saturday before closing out the season at rival Arizona State.

J.J. Taylor had 17 carries for 74 yards and caught six passes for 55 yards for the Wildcats.

Both teams were coming off byes.

Tate, who had started eight of Arizona’s previous nine games, started the second quarter and played until Gunnell replaced him with just under 10 minutes left in the game.

Oregon scored on its second play from scrimmage on Herbert’s 73-yard touchdown pass to Johnny Johnson III, the longest passing play for the Ducks this season. Oregon extended the lead before the end of the first quarter on Cyrus Habibi-Likio’s 1-yard scoring run.

``The second play of the game you give up a home run, and a crowd like this, just revved it up even more,” Sumlin said. “And playing from behind early in this game, and the inexperience of really our backup offensive line, put even more pressure on guys against a team that is No. 6 in the country.”

Herbert completed a 53-yard touchdown pass to Juwan Johnson on a reverse flea flicker to put Oregon up 21-0.

Lucas Havrisik kicked a pair of field goals from 23 and 42-yards out to narrow the gap and Oregon led 21-6 at halftime.

Spencer Webb evaded Arizona linebacker Tony Fields II to pull down Herbert’s 24-yard back shoulder pass midway through the third quarter. It was Herbert’s 100th career touchdown for the Ducks. He also surpassed 10,000 yards of total offense in the quarter.

A senior, Herbert decided to stay at Oregon for his final year of eligibility. He is expected to be one of the top quarterbacks available in next year’s NFL Draft.

Herbert’s fourth-down pass was tipped an intercepted by Scottie Young Jr., who ran it to the Arizona 48, but the Wildcats were unable to capitalize on the turnover.

“This is a learning experience for some guys, a bunch of guys that really hadn’t played a lot in their careers. We have to stay together as a team,” Sumlin said. “We’ve got some things we can clean up, too many penalties, things like that, some inexperienced plays. We didn’t turn the ball over, which was maybe the only positive thing, and the guys kept playing hard all the way until the end.”

Arizona: J.J. Taylor passed Mike Bell for fifth on Arizona’s career rushing list. Taylor is averaging more than 70 yards a game this season. ... Tate moved into fifth place on the Arizona all-time passing yards list in the opening half.

Oregon: Oregon freshman receiver Mycah Pittman appeared to injure his wrist in the opening quarter and was carted to the locker room. ... Former Ducks quarterback Marcus Mariota was on the Oregon sideline during the game. ... Travis Dye was the 19th Duck to score this season. ... Oregon had six sacks.

FACING HERBERT: “He’s a real smart player, he makes good decisions with the ball,” Young said. “He doesn’t give the ball away, he doesn’t make too many mistakes, so you’ve got to force him to make mistakes, try not to give any easy throws, make everything difficult for him, make him think a little bit more, making him work harder.”

Oregon: The Ducks play Arizona’s other Pac-12 team, the Sun Devils, next Saturday in Tempe. ASU fell to Oregon State, 35-34, in Corvallis.