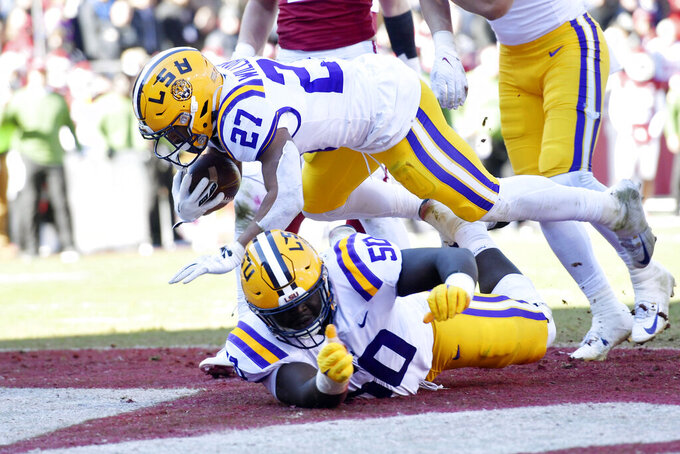 LSU running back Josh Williams (27) leaps over teammate Emery Jones Jr. (50) as he scores a touchdown against Arkansas during the second half of an NCAA college football game Saturday, Nov. 12, 2022, in Fayetteville, Ark. (AP Photo/Michael Woods)

The freshman linebacker, whose strip-sack of Arkansas quarterback Cade Fortin with 1:17 left clinched the win and kept LSU's College Football Playoff hopes alive, had the flu before the teams kicked off, the coach said.

When Kelly told Perkins that his effort against the Razorbacks reminded him of MJ against the Jazz in 1997, Kelly said the teenager responded, “Who’s MJ?”

Perkins finished with two forced fumbles, four sacks and eight tackles. His teammate Mekhi Wingo pounced on the loose ball at the Arkansas 44 to clinch the win for LSU (8-2, 6-1 Southeastern Conference).

LSU’s defense allowed 249 yards to Arkansas’ offense, which by game’s end was down to its third-string quarterback.

The Razorbacks (5-5, 2-4) attempted to rally in the fourth quarter when Fortin entered in the third quarter to replace an ineffective Malik Hornsby. Fortin threw a 40-yard touchdown pass to Matt Landers with 13:12 left to pull Arkansas within three.

But LSU’s offense was little bit better, gaining 284 yards — more than 150 below its season average. Josh Williams ran for 122 of those yards and scored the Tigers’ only touchdown, a 1-yarder, late in the third quarter to provide LSU a 10-point lead. Only one of the Tigers’ 13 series yielded more than 40 yards.

“We are far from a finished product,” Kelly said. “I don’t think anybody in that locker room thinks we have arrived.”

Arkansas sacked LSU quarterback Jayden Daniels seven times, limiting the SEC’s top rusher at the position to 10 yards on 19 carries. Daniels completed 8 of 15 passes for 86 yards and an interception.

“I think the defense played so well that that gave us a chance. They kept us in it,” Arkansas coach Sam Pittman said. “I thought when Landers got the long one that we were going to rally around that and it seemed like it was the same story. Just didn’t seem to find a way to be consistent.”

LSU forced Arkansas’ hand by stifling Hornsby, who ran for 37 yards on 18 carries and finished 4 of 9 passing for 24 yards. Daniels found Kayshon Boutte for a 26-yard gain on a single pass one play ahead of Williams’ touchdown with 5:25 left in the third quarter.

The Razorbacks were without their usual starting quarterback, KJ Jefferson, announcing minutes before kickoff that Jefferson would not play due to a shoulder injury. Fortin finished 8 of 13 for 92 yards with the score and the lost fumble.

LSU can clinch the SEC West and a spot in the SEC Championship with a victory in the season finale in two weeks against Texas A&M.

“We’ve got a lot of work to do this journey, but we’re still finding ways to win football games,” Kelly said.

Arkansas' 249 yards is the fewest LSU has allowed an SEC opponent to gain since Texas A&M managed just 169 in 2019. LSU won the national championship that season.

Arkansas entered Saturday with 13th best output in total offense in FBS. Jefferson had thrown for 17 touchdowns against three interceptions and had run for 425 yards and six scores.

LSU was able to pack its defense into the box without Jefferson behind center.

“Not seeming to have much success on any of it right now,” Pittman said. “And part of it is they’ve got to respect that the quarterback is going to pull the ball and throw it and if they don’t, you’ve got problems.”

LSU isn’t likely to jump given the margin of victory, but the Tigers won a game they couldn’t afford to lose.

LSU: Looked much different Saturday than in last week's win over Alabama. LSU's College Football Playoff hopes may hinge on which team shows up at each game.

Arkansas: Hosts Ole Miss on Nov. 19 in its final home game of the season.