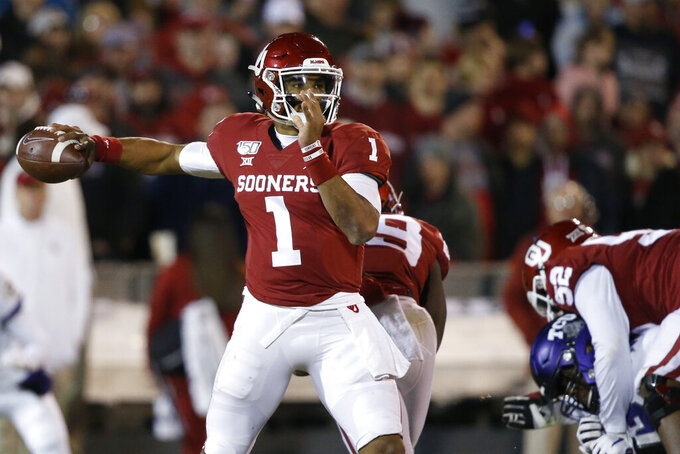 Some things to watch on the final weekend of the regular season in the Big 12, a week before No. 7 Oklahoma and No. 11 Baylor play in the conference championship game:

No. 7 Oklahoma (10-1, 7-1, No. 7 CFP) at No. 21 Oklahoma State (8-3, 5-3, No. 21). While the Sooners are already locked into playing for their fifth consecutive Big 12 title the following Saturday, they have to win their Bedlam rivalry game if they are going to have any chance to make the College Football Playoff for the fourth time in five years. The Sooners are 15-1 when both teams are ranked for Bedlam. Oklahoma State has a four-game winning streak, but is without quarterback Spencer Sanders (thumb surgery) and receiver Tylan Wallace (torn ACL). This game features the Big 12’s top two rushers — Oklahoma State sophomore Chuba Hubbard (166.5 yards per game, 20 TDs) and Oklahoma dual-threat quarterback Jalen Hurts (105.1 yards per game, 17 TDs), who is also the league’s most efficient passer with 3,184 yards passing, 30 TDs and six interceptions.

Iowa State (7-4, 5-3) at Kansas State (7-4, 4-4). The Cyclones have a slim 50-48-4 in the “Farmageddon” rivalry, after winning 42-38 last year to end a 10-game losing streak in the series. While both teams will have a winning record, they were so close to more. Kansas State followed an upset of Oklahoma on Oct. 26, and a four-touchdown win over instate rival Kansas, with consecutive losses by a combined seven points before a 30-27 win at Texas Tech last week. Iowa State’s four losses are by a combined 11 points, including a one-point loss at Oklahoma when a 2-point conversion failed in the final minute.

Texas (6-5) already has at least five losses for the eighth time in 10 seasons, after not losing more than three in any of the 10 seasons before that. ... Oklahoma has won 20 consecutive November games since a 2014 loss to Baylor. ... Texas Tech graduate transfer RJ Turner is coming off consecutive 100-yard receiving games. ... The Big 12’s average margin in conference games is 11.6 points, the closest among FBS leagues. More than half of those games have been decided by 8 points or less.

TCU (5-6), needing a win to get bowl eligible, is a nearly two-touchdown favorite at home against West Virginia (4-7, 2-6). Since the two teams came into the Big 12 together in 2012, the Horned Frogs have won four of seven meetings. But the Mountaineers won by 37 points last year at home, by 24 two years before that, and have two one-point losses to TCU. Plus, there’s a chance for rain and sloppy conditions on the grass turf at TCU.

Baylor junior defensive end James Lynch is the Big 12 leader this season and the Bears’ career record-holder in sacks. Lynch has 10½ this season, and 19 in his career. He took over the school record with two last week against Texas, his fourth game this season with multiple sacks. He had gone four games without a sack before that, but had remained the Big 12 leader throughout that drought.