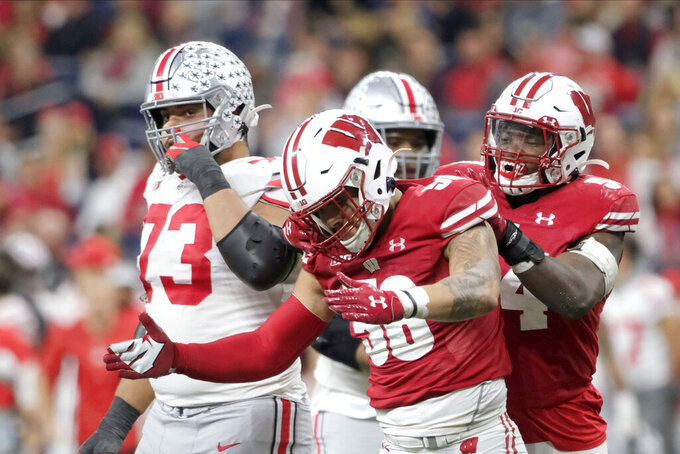 The 106th edition of the Granddaddy of Them All is mostly for bragging rights in the game's traditional Big Ten/Pac-12 rivalry. Oregon can cap its breakthrough second season under coach Mario Cristobal with its first Rose Bowl victory in five years. Wisconsin is going for its first win in Pasadena in 20 years and a sixth consecutive bowl victory overall.

Wisconsin running back Jonathan Taylor is one of the nation's best, racking up his third straight 1,900-yard season behind another stout Badgers' offensive line. But Oregon's defense has held its opponents to just 106.8 yards rushing per game, including just 3.2 per carry, with linebacker Troy Dye leading an opportunistic group.

Oregon: Justin Herbert caps his stellar four-year career with his 42nd start at quarterback before he heads to the NFL draft. The Eugene native's offense has been steadily productive even without a receiver among the nation's top 70 in yardage. Herbert is eager to embrace one last chance to live his college dreams.

Wisconsin: The Ducks say they haven't seen anybody quite like linebacker Zack Baun, who leads the Badgers with 12 1/2 sacks and 19 1/2 tackles for loss. The relentless senior has disrupted entire offenses with his all-around play, and Herbert will have to be aware of his location on every snap against coordinator Jim Leonhard's versatile defense.

A rematch of the 2012 Rose Bowl between two frequent visitors to Pasadena. Oregon won a thriller, 45-38. ... Wisconsin makes its 10th appearance in the Rose Bowl, but the Badgers haven't won in 20 years since Ron Dayne led them to back-to-back victories. They made three straight losing appearances from 2011-13. ... Oregon is in its eighth Rose Bowl and its first in five years since Marcus Mariota led a 59-20 rout of Florida State in the first College Football Playoff game ever. ... The Ducks have won five straight games, including a Pac-12 title game romp over Utah. They're looking to complete the fifth 12-win season in school history. ... Oregon defense yielded just 15.7 points per game, ranking eighth in nation. ... Wisconsin RB Jonathan Taylor likely plays the last game of his career. He has 6,080 yards rushing in three seasons. ... Freshman Oregon defensive lineman Kayvon Thibodeaux is a Los Angeles-area native, among 48 Ducks from California.

By John Zenor 5 minutes ago
By Pete Iacobelli 2 hrs ago
2 hrs ago
By Ralph D. Russo 6 hrs ago
By Ken Powtak 19 hrs ago