No. 7 Oregon puts 7-game winning streak on the line at USC 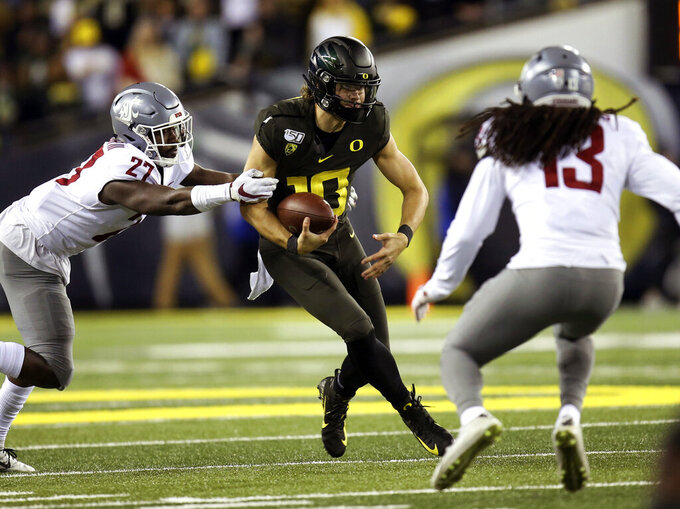 Oregon has played its way into College Football Playoff contention with a seven-game winning streak, but the Ducks won't stay there unless they can get past their fellow Pac-12 division leaders at the Coliseum, where USC is 23-3 under embattled coach Clay Helton. The game looms large in recruiting, with Mario Cristobal's staff hitting talent-rich Los Angeles hard and taking advantage of the struggles and instability at USC and UCLA to persuade players to join them in the rain up north.

USC's star receivers vs Oregon's secondary. This is strength on strength, with the Trojans' trio of Michael Pittman Jr., Amon-Ra St. Brown and Tyler Vaughns providing an enormous challenge to the Oregon defense that leads the nation with 14 interceptions, including veteran cornerbacks Thomas Graham Jr. and Deommodore Lenoir and safety Nick Pickett — all Los Angeles-area natives, of course.

Oregon: QB Justin Herbert. The Ducks' Heisman Trophy candidate has passed for 2,104 yards in eight games with 21 TDs and one interception, and he has thrown 131 straight passes without a pick. USC defensive coordinator Clancy Pendergast has had success against star players before, but the Trojans' injury-riddled defense could struggle against an elite QB.

USC: RB Kenan Christon. The California 100-meter state sprint champion has produced two strong games after being forced into action by injuries to the Trojans' top three running backs. He's likely to get most of the carries again, and his open-field speed can wreck any defense.

The schools haven't met since 2016. ... The Ducks have won four of last six against Trojans, but Helton and Sam Darnold beat Oregon at the Coliseum in last meeting. ... USC is playing its fifth ranked team already this season. ... Oregon RB C.J. Verdell leads Pac-12 with 753 yards rushing. ... USC freshman QB Kedon Slovis is completing 72% of his throws. ... The Ducks have 48 native Californians on their roster. USC has four players from Oregon. ... Two sets of brothers on opposing teams: USC's Pittman and Oregon WR Mycah Pittman, and USC LB Eli'jah Winston and Oregon LB La'Mar Winston.