No. 7 Stanford gets Love back for showdown at No. 20 Oregon 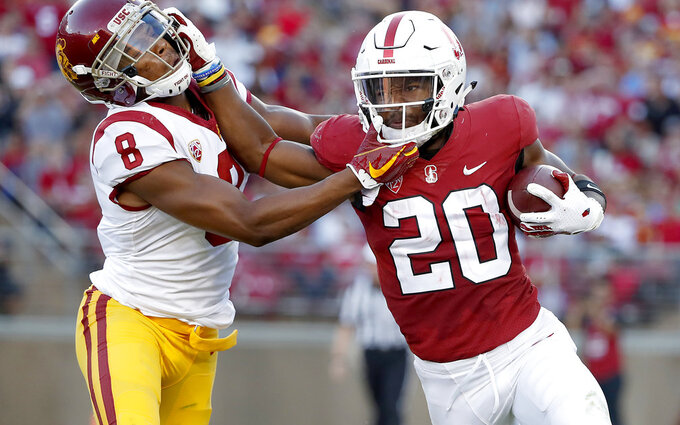 FILE - In this Saturday, Sept. 8, 2018 file photo, Stanford running back Bryce Love (20) stiff-arms Southern California cornerback Iman Marshall (8) during the first half of an NCAA college football game in Stanford, Calif. Stanford will get star running back Bryce Love back for this week's Pac-12 North showdown against No. 20 Oregon but the seventh-ranked Cardinal will be without a key defensive player. (AP Photo/Tony Avelar, File)

STANFORD, Calif. (AP) — Stanford will get star running back Bryce Love back for this week's Pac-12 North showdown against No. 20 Oregon but the seventh-ranked Cardinal will be without a key defensive player.

Coach David Shaw said Tuesday that outside linebacker Casey Toohill will miss the game against the Ducks (3-0, 0-0 Pac-12) with an undisclosed injury.

"Last week he was Coach Bryce, working with the other guys, telling them what he saw and walking around with a script," Shaw said. "He still got his workouts in last week so he's physically ready this week. This week he doesn't need to coach anybody. He just needs to carry the ball."

The Cardinal will be counting on Love in the tough environment of Autzen Stadium against a defense that has allowed opponents just 2.0 yards per carry and 77 yards per game on the ground.

Stanford hasn't hit its stride yet running the ball after last year's stellar campaign that made Love the Heisman Trophy runner-up. He ran for 2,118 yards a year ago for the most of any Power 5 player, averaged 8.1 yards per carry and set an FBS record with 13 runs of at least 50 yards.

He hasn't had as easy a go of it this year as defenses have loaded up the box to limit his production.

Love was held to 29 yards on 18 carries in a season-opening win over San Diego State. He fared much better in Week 2 with 136 yards on 22 carries against USC but has yet to break a long TD run this season.

As a team, the Cardinal are averaging just 3.8 yards per carry this season and haven't topped 160 yards on the ground in any of their three games.

"Two out of three games, the defenses were just saying, 'We're going to put one more guy in the box than you can block,'" Shaw said. "I'm stubborn enough to keep running it and try to establish the run game, knowing that we have a running back that even if they do load the box if we get a crease he'll still take it the distance."

This will be the first time this year the Cardinal will have a healthy Love and starting center Jesse Burkett, who missed the first two games with injuries.

That leadership of a fifth-year senior anchoring the offense line will be important at the usually loud Autzen Stadium.

"There are things he'll see that a first-year starter is not going to see," Shaw said. "There's some things he'll anticipate happening. There's also a command he has. ... That guy walks in and makes a call and if anybody has a question, he'll make it louder and you're going to do it."

While the Cardinal should be healthier on offense, they will miss Toohill on defense. He has 14 tackles, two pass breakups, three quarterback hurries and one sack in three games this season as part of Stanford's best position group on defense. The Cardinal lead the nation in scoring defense at 7.7 points per game.

Toohill's injury will put Jordan Fox into the starting lineup against a challenging Ducks offense that features an athletic quarterback in Justin Herbert.

"It will be tough without Casey," linebacker Joey Alfieri said. "He brings a lot to our defense. Jordan Fox will have to step up. ... We have a lot of young guys who have shown a lot of good ability in camp and in the first three games."