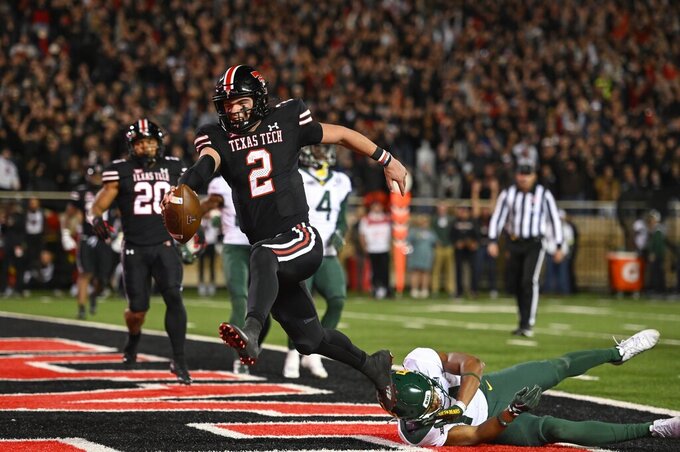 Texas Tech quarterback Behren Morton (2) runs the ball in for a touchdown against Baylor during the second half of an NCAA college football game Saturday, Oct. 29, 2022, in Lubbock, Texas. (AP Photo/Justin Rex)

Line: TCU by 9 1/2, according to FanDuel Sportsbook.

Undefeated Big 12 leader TCU is looking to start 9-0 for the first time since 2010, the program's undefeated 13-0 season that ended with a Rose Bowl victory and No. 2 national ranking. This is the sixth ranked opponent for Texas Tech, which is 2-3 against the previous five. The Horned Frogs have won three in a row, and six of eight, in the series. Both of those TCU losses were by three points at home.

Max Duggan, Quentin Johnston and TCU’s passing game vs. Texas Tech defense. Duggan is the Big 12 leading passer with more than 276 yards per game and 22 touchdowns. Johnston has averaged 134 yards receiving the past four games, with a touchdown in each of them. Senior cornerbacks Malik Dunlap and Rayshad Williams are among the league leaders in passes defended for the Red Raiders, who have only five interceptions but have allowed only 217 yards per game passing and a league-low nine TDs.

TCU: RB Kendre Miller has run for more than 100 yards in five of the past six games, and has scored a rushing touchdown in nine consecutive games going back to last season. That TD streak is second only in school history to the 15 in a row by NFL Hall of Famer LaDainian Tomlinson that was set in 2000.

Texas Tech averages an FBS-best 87.4 offensive snaps per game and is second in the Big 12 with 475.9 total yards per game, trailing only TCU's 518.6 yards per game. ... The Red Raiders lead the league with 338 yards passing per game while using three different starting quarterbacks. But they have the league’s least efficient passing offense because of a Big 12-high 15 interceptions and a 61.9 completion percentage that is second-worst. ... TCU is 6-4 against the Red Raiders since joining the Big 12. The wins are by an average margin of more than 20 points, with the losses by fewer than five points a game.