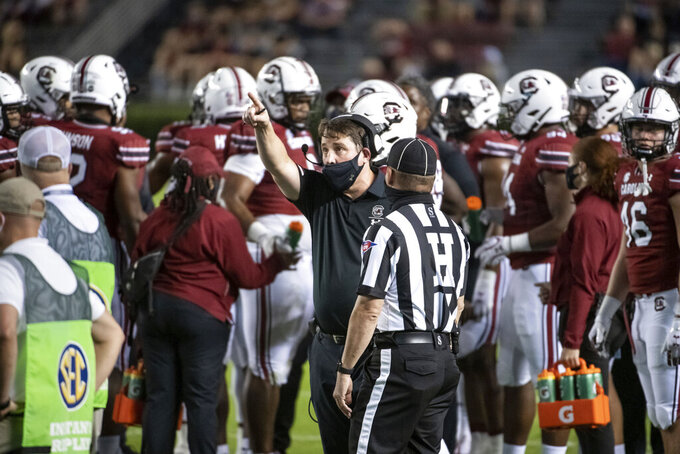 South Carolina coach Will Muschamp points to the video screen during the first half of the team's NCAA college football game against Texas A&M on Saturday, Nov. 7, 2020, in Columbia, S.C. (AP Photo/Sean Rayford)

Just maybe all the way to a playoff berth. They certainly look the part against the Gamecocks.

“You always think you can be dominant,” Texas A&M coach Jimbo Fisher said. “The experience has helped on each side of the ball. Learning to win each play and, in turn, the bigger picture is coming together.”

Especially when Mond, Spiller and the Aggies defense play like this.

Mond set the school mark with the 68th touchdown pass of his career, a 52-yarder to Devon Achane in the third quarter with the game long decided.

Mond also ran for a score to help Texas A&M improve to 5-1 — all in the Southeastern Conference — for its best start since opening 6-0 in 2016. The Aggies are 7-0 against the Gamecocks.

Mond and Spiller helped the Aggies open a 21-0 halftime lead and cruise to their fourth consecutive victory since a loss at Alabama last month.

Spiller had two short pickups for first downs — one on a fourth-and-1 with Texas A&M in chip-shot field goal range — before Mond flipped a 4-yard TD pass to Ainias Smith.

Mond found tight end Jalen Wydermeyer for two first-half scores. Wydermyer was left all alone and walked into the end zone on a 15-yard scoring grab. Right before half, Mond hit Wydermyer on a crossing route near the goal line to go up three scores.

South Carolina (2-4), coming off an off week, had no answer.

Quarterback Collin Hill was 8 of 21 for 66 yards and two interceptions before getting lifted in the fourth quarter for last year's starter and current backup, Ryan Hilinski.

Kevin Harris, the SEC's second-leading rusher coming in, was limited to 39 yards on 13 carries.

Mond had a 15-yard scoring run to start the third quarter before his long TD pass to Achane gave him his latest school record. Mond already holds career Aggies marks for completions, passing yards and total offense — probably with more on the way as his senior season continues.

Spiller also had two catches for 46 yards before limping off the field in the third quarter. The tailback went into the Aggies' medical tent and came out running on the sidelines. But with Texas A&M's big lead, he was not needed in the second half.

South Carolina has surrendered 1,071 yards and 100 points in losses to LSU and the Aggies its past two games.

The Gamecocks avoided their first shutout since 2018 on Parker White's 48-yard field goal with less than six minutes left.

South Carolina linebacker Ernest Jones said the most disappointing thing was playing this poorly after a week off.

“It's very frustrating,” he said. “We had an extra week and we just didn't come out and play to the best of our ability.”

Texas A&M: The Aggies continued to look like a College Football Playoff team, although they'd need plenty of help to get there after losing to the Crimson Tide. The schedule, though, going forward is not easy with games at Tennessee and Auburn and a visit from defending national champion LSU.

South Carolina: The Gamecocks played without three defensive starters in lineman Aaron Sterling and defensive backs Shilo Sanders and R.J. Roderick. It's unsure why since Gamecocks coach Will Muschamp does not detail absences related to COVID-19 or those players forced to isolate.

Texas A&M coach Jimbo Fisher believed his team won the game up front with strong play from both his offensive and defensive lines. The offense gave Mond a safe, clean pocket to work from while the defense limited South Carolina to 50 yards rushing. "It was very tough going early, just kept pounding, pounding, pounding, and pounding. I think the key was up front," he said.

The lack of South Carolina offense had some in the coronavirus reduced crowd of 16,253 chanting, “Fire Muschamp.” The fifth-year coach understood. “After the last two performances, I don't think there's any doubt they should be” upset, he said.

Texas A&M: At Tennessee on Saturday.

South Carolina: At Mississippi on Saturday.