No. 7 USC back home to face always-dangerous Fresno State 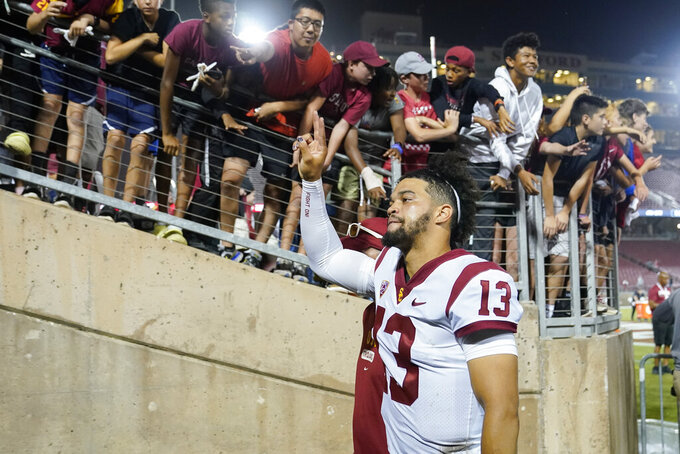 Southern California quarterback Caleb Williams (13) walks off the field after his team's victory over Stanford in an NCAA college football game in Stanford, Calif., Saturday, Sept. 10, 2022. (AP Photo/Godofredo A. Vásquez)

LOS ANGELES (AP) — No. 7 Southern California's roaring start under Lincoln Riley has caught the college football world's attention and driven the Trojans to their highest ranking in five years.

Fresno State is exactly the type of opponent that could put the brakes on the excitement around a rebuilding project that's humming along smoothly.

Caleb Williams looks to remain unbeaten on the West Coast when the quarterback leads USC (2-0) back to the Coliseum on Saturday to face Jake Haener and the Bulldogs (1-1), who came agonizingly close to an upset of Oregon State last week.

“They’re good everywhere," Riley said of the Bulldogs. “They’re very experienced. They know how to win. They’ve obviously got a staff there of guys that are extremely experienced and know how to get it done at this level. I think (those are) always some of the toughest types of teams, because you just don’t identify a ton of weaknesses on tape, and you know you’ve got to be on your game.”

Both teams are coming off strong starts and less-impressive finishes in their most recent games, making the second half critical in the second home game of Riley's tenure.

USC led Stanford 35-14 at halftime with five consecutive touchdown drives last week, but managed just two field goals in the second half of its still-comfortable win. Riley isn't dismayed by his high-powered offense's letdown, citing key penalties and protection breakdowns as the main culprits, but he knows there will be games this season — including this visit from Fresno State — in which that lack of execution could be costly.

"Whether it’s complacency, lack of focus, lack of trust, whatever it is, it’s got to get better,” Riley said.

The Bulldogs are a formidable booking for one of the Trojans' three nonconference games. Fresno State went 10-3 last season under coach Kalen DeBoer, who moved on to Washington and allowed Jeff Tedford to return to his alma mater with a fairly loaded roster.

Fresno State hasn't beaten an opponent ranked as high as the No. 7 Trojans since 2001, but the Bulldogs have built a program with the respect of every top-tier opponent.

They had a nine-point lead on Oregon State in the fourth quarter last week, but the Beavers rallied and walked off with a 2-yard TD run as time expired to beat the Bulldogs despite 360 yards passing from Haener, the latest in the school's long line of elite passers.

“They're deserving of their ranking,” Tedford said of the Trojans. “I look at their athleticism and their size and their speed and the things they do, and they're right up there.”

Two elite passers could move their teams up and down the field all night in this matchup. Williams is in all the early conversations around the Heisman Trophy after passing for 590 yards and six touchdowns with no interceptions in his first two games at USC.

Haener grew up rooting for USC in the Bay Area and was mildly surprised when the Trojans didn't pursue him. The Washington transfer is now in his third season as Fresno State's starter, and the 23-year-old veteran has shown his maturity and poise while passing for 737 yards with three TDs and no interceptions in the Bulldogs' first two games.

Tedford is a Los Angeles-area native who has ample experience against the Trojans. Tedford famously led California to an epic triple-overtime victory over Matt Leinart and then-No. 3 USC in September 2003 in Berkeley despite losing Aaron Rodgers to injury during the game.

The Bulldogs' special teams coordinator, associate head coach and tight ends coach is John Baxter, who spent seven years during the 2010s in some of the same jobs at USC under Lane Kiffin and Clay Helton.

USC is expecting a large evening crowd to watch Riley’s creation two weeks after his team debuted in front of more than 60,000 fans despite 95-degree midday temperatures. Riley has repeatedly spoken of his desire to turn the Coliseum back into a foreboding fortress, and Tedford has more than enough Pac-12 experience to know how that feels.

“It's a great place to play, and it's a tough environment to play in if the Coliseum is really rocking,” Tedford said. “It can be really loud there. I've been there a few times when it's been like that, during Coach Carroll's days.”

USC's defense is still searching for its stride, and Haener presents a formidable challenge. But the Trojans have overcome some of their growing pains by forcing eight turnovers in their first two games, allowing the offense to cruise to two comfortable wins. USC hadn't produced eight takeaways in two games since late in the 2020 season.