No. 8 Cincinnati has CFP hopes, but first comes rival Miami 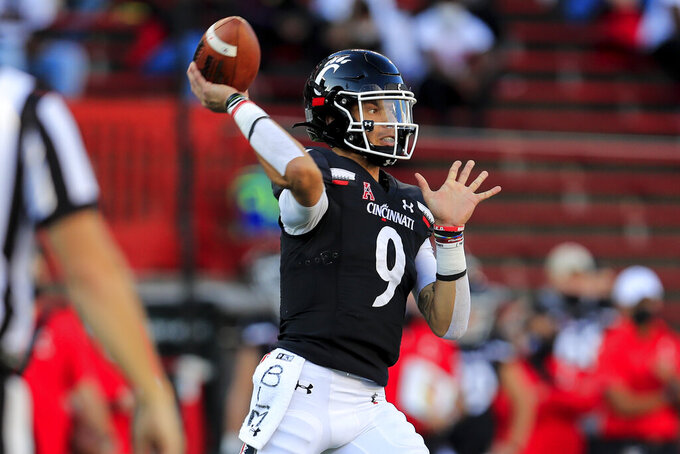 FILE - Cincinnati quarterback Desmond Ridder throws a pass during the first half of an NCAA college football game against Houston in Cincinnati, in this Saturday, Nov. 7, 2020, file photo. Ridder returns for his senior season, looking to add to his 6,905 career passing yards and 57 career touchdowns, but also to take on more of a leadership role. (AP Photo/Aaron Doster, File)

Line: Cincinnati by 22 1/2, according to FanDuel Sportsbook.

No. 8 Cincinnati has hopes of reaching the College Football Playoff and has big games on the non-conference schedule at No. 9 Notre Dame and No. 17 Indiana. But none of that will matter if the Bearcats don’t take care of business in the season-opener against rival Miami (Ohio).

RedHawks coach Chuck Martin spoke this week about keeping Bearcats quarterback Desmond Ridder in the pocket. While Ridder had the ability to beat defenses over the top, he also can change the game with his feet. Ridder had 12 rushing TDs last season.

Miami: Sophomore quarterback Brett Gabbert is the brother of NFL quarterback Blaine Gabbert. Brett Gabbert passed for 384 yards and four touchdowns in two games last season. In 2019, he was named the Mid-American Conference freshman of the year.

Cincinnati: Ridder passed for more than 2,296 yards last season and 19 touchdowns while completing better than 66% of his passes. He also had 12 rushing TDs.

The “Battle for the Victory Bell” is the longest collegiate football rivalry west of the Allegheny Mountains, dating to 1888. It is the fifth-most played rivalry in Division I (FBS only) with 124 all-time meetings and is the oldest non-conference rivalry in the nation. … Cincinnati is the first team from outside the Power Five to be ranked in the preseason top 10 since Louisville started ninth in 2012. At No. 8, the Bearcats have the best preseason ranking for a non-Power Five or BCS conference team since Boise State was No. 5 to begin 2011. … The Bearcats return 16 starters from last year’s squad which went 9-1 and lost 24-21 to Georgia in the Peach Bowl.

By John Zenor 30 minutes ago
By Pete Iacobelli 58 minutes ago
an hour ago
By Ralph D. Russo 4 hrs ago
By Ken Powtak 18 hrs ago