No. 8 Florida, Miami embrace spotlight as they start season 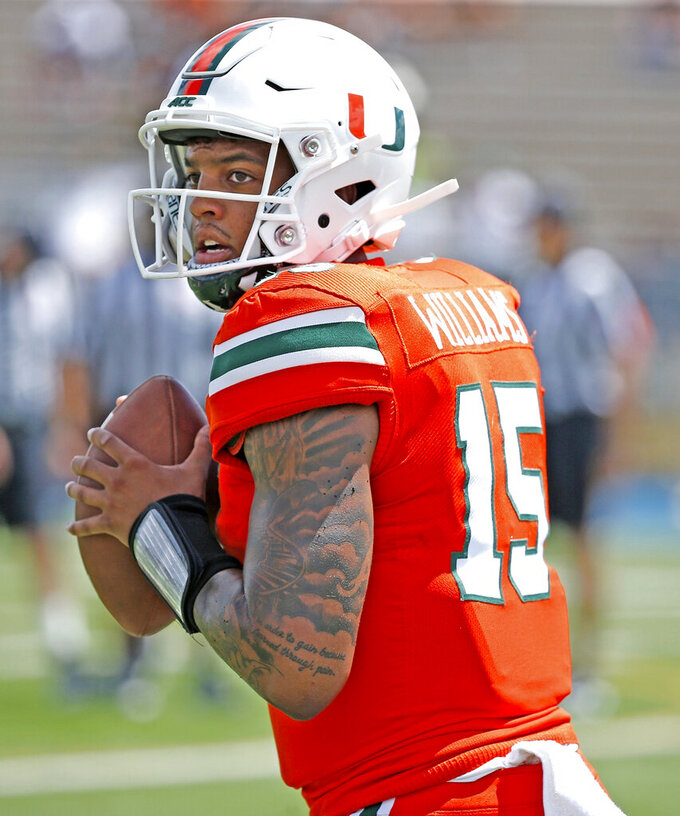 FILE - In this April 13, 2019, file photo, Miami quarterback Jarren Williams (15) sets up to pass during an NCAA college football scrimmage in Miami. Florida and Miami have the college football stage to themselves for 3 ½ hours Saturday, a new chapter in their once-heated and forever-storied rivalry. (Al Diaz/Miami Herald via AP, File) 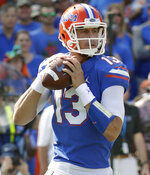 ORLANDO, Fla. (AP) — Florida and Miami have the college football stage to themselves for 3 ½ hours Saturday, a new chapter in their once-heated and storied rivalry.

The eighth-ranked Gators and the rebuilding Hurricanes will usher in the 2019 season inside a packed stadium in Orlando, surrounded by sideline celebrities and in front of a coast-to-coast television audience.

The winner surely will revel in the spotlight, and both teams have embraced the opportunity to set the tone for the season in front of way more than friends, fans and family members.

"What are they going to see?" Florida coach Dan Mullen said. "What's our stamp? When every college person in the country turns on their TV, what's their thought when they see the Florida Gators? We have to go out there and live up to that on the field.

"What do you want them to think about you?"

The Gators certainly think highly of themselves, especially after notching 10 wins in Mullen's first season and closing out that inaugural campaign with resounding victories against Florida State (41-14) and Michigan (41-15).

Florida now has its highest preseason ranking since Urban Meyer's final year in Gainesville in 2010 and sounds more than optimistic heading into the opener. Players don't seem to care — most don't even know — that they've lost seven of the last eight and 12 of 16 against Miami.

"I think this team is really special," Gators quarterback Feleipe Franks said. "We expect to go out there and win every Saturday and try to make it a playoff contender and win a championship here again. That's the expectations here every year."

It hasn't been the reality since Meyer's departure.

But Mullen has the program on the upswing. Florida jumped eight spots, from 13th to fifth, in scoring in the Southeastern Conference during Mullen's debut season — the kind of offensive prowess that's been missing in Gainesville since Tim Tebow graduated.

Miami coach Manny Diaz, who spent two years working for Mullen at Mississippi State, can only hope for something similar in his first season as a head coach. The team's former defensive coordinator inherited a team mixed with holdovers and holes.

"I want to find out can we handle adversity," he said.

Diaz brought in former Miami coach Jimmy Johnson, who also won three Super Bowls with the Dallas Cowboys, to speak to his players this week. Mullen countered with Tebow, who won his only game against the Hurricanes.

Johnson went 3-1 against Florida during his stint with the Canes and certainly has more insight into the series than others around town.

"Being in this city, with so much history and things like that, it's hard to stay focused," Miami linebacker Shaq Quarterman said. "You can go to Winn-Dixie and a fan will try to give you the illustrious history of Miami and why this game is so important."

Here are some other things to know about the 56th meeting between the schools:

Miami's Jarren Williams will become the Hurricanes' 13th different starting quarterback in the last 20 years , and if history is any indicator, he won't put up massive numbers against the Gators. Starting with Ken Dorsey's debut in 1999, Miami quarterbacks have averaged 177 yards passing in their first starts. Malik Rosier threw for the most out of that group, 272 yards against Duke in 2015.

Keep an eye on both offensive lines, which could have their hands full against stout defenses.

Florida has four new starters up front, including tackles Stone Forsythe and Jean Delance. Miami is even younger, with tackles Zion Nelson and John Campbell making their first career starts against the Gators.

ESPN will air its signature "College GameDay" show from Disney World's Magic Kingdom on Saturday, but there are rules — such as no signs and no flags. And that means the Washington State flag, which has flown at every GameDay site since 2003, might see its appearance streak end. Ol' Crimson, as it is known, has been to at least 72 cities and 34 states for GameDay since its streak of flying high on the show began.