No. 8 Nittany Lions eager for Big Ten opener at Indiana 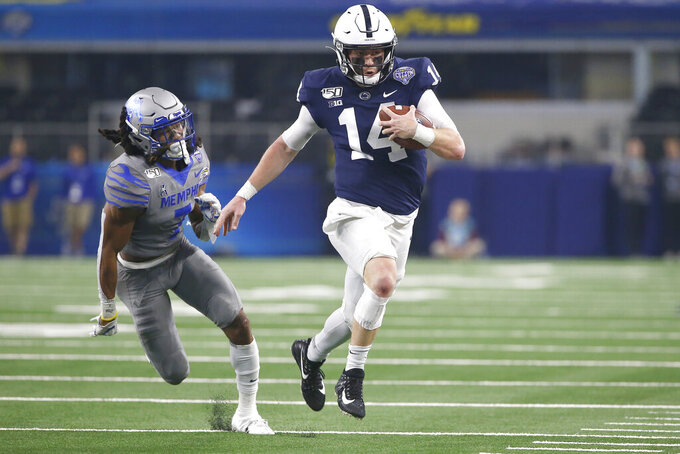 FILE - In this Dec. 28, 2019, file photo, Penn State quarterback Sean Clifford (14) carries the ball as Memphis defensive back Chris Claybrooks (7) closes in during the first half of the NCAA Cotton Bowl college football game, in Arlington, Texas. It hasn’t been an ideal time for No. 9 Penn State to install a new offense, but the Nittany Lions believe they have the pieces in place to be one of the better teams in the country. (AP Photo/Ron Jenkins, File)

If the Nittany Lions want to win a Big Ten title they can't get derailed in Week 1. While Penn State has dominated the series on paper, the Hoosiers have been competitive the last two years, falling 34-27 on the road last year and 33-28 at home in 2018. Indiana is seeking a signature win against a top-10 foe following this unusual offseason.

Penn State QB Sean Clifford vs. Indiana run defense. The Hoosiers remember how close they were to pulling the upset following an early fourth-quarter TD, cutting the deficit to 27-24. Clifford promptly took control with his feet, making play after play on a game-sealing touchdown drive that lasted 9 minutes, 1 second. Indiana has been reliving those frustrations since the revised schedule came out.

Indiana: QB Michael Penix Jr. After injuries shortened his first two college seasons, Penix has added 16 pounds in hopes of staying healthy. His first big test comes against a defense that finished last season ranked seventh in the Big Ten in yards allowed per game (324.2) and third in points allowed per game (16.0).

The Nittany Lions won 11 games last season, the third time they've achieved that feat in four years. ... Indiana is coming off its first eight-win season since 1993. ... Penn State enters this season on a two-game winning streak and has won three of its last four. ... The Hoosiers' last win over a top-10 team was a 31-10 blowout Oct. 10, 1987 at Ohio State. ... Nittany Lions TE Pat Freiermuth needs 125 yards to reach 1,000 in his career. Clifford needs 151 yards passing to reach 3,000. ... Indiana coach Tom Allen has 18 wins, the most in school history over his first three seasons. ... Both teams will debut new offensive coordinators.