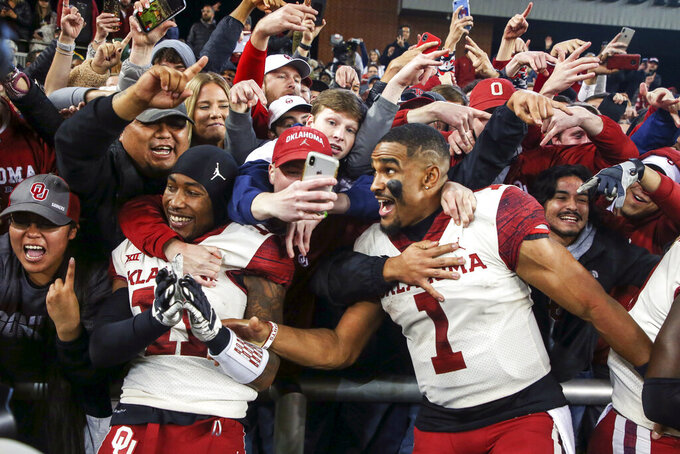 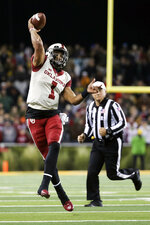 NORMAN, Okla. (AP) — Oklahoma quarterback Jalen Hurts borrowed an example from another sport to explain his approach to rallying his team.

“It’s like these great basketball players,” he said. “The best shooters you’ve ever known, whoever your favorite is — their shot doesn’t always fall, but they keep shooting. Just keeping on and attacking. And trusting. There’s always a way.”

Hurts helped Oklahoma erase a 25-point deficit to beat previously unbeaten Baylor 34-31 on Saturday. The Sooners extended their November win streak to 19 games, the key to their run of four straight Big 12 titles and three trips to the College Football Playoff.

Oklahoma has been especially tough in pressure situations. The Sooners have six November wins the past two years. Five of them are by five points or fewer. The comeback against Baylor was the largest in school history.

“We found a way, and I think it’s some of the culture in this place,” coach Lincoln Riley said. “The teams that we’ve had and players ... Winning games and having a chance to win a championship at the end of the season is of the utmost importance to them.”

The number of close calls in what the Sooners call “Championship November” the past two years is stunning.

Last year, close shootouts fueled quarterback Kyler Murray’s Heisman Trophy run. In its first November game, Oklahoma trailed Texas Tech 31-28 at halftime before winning 51-46. The next week, Oklahoma led Oklahoma State late, but Oklahoma State scored with 1:03 remaining to cut the Sooners’ lead to 48-47. The Cowboys went for two, but Oklahoma’s Tre Brown tipped a pass away near the goal line, and Oklahoma held on.

In last year’s regular-season finale, Oklahoma trailed West Virginia 49-45 at the end of the third quarter, but Curtis Bolton returned a fumble 48 yards for a touchdown to help the Sooners win 59-56.

Oklahoma trailed last Saturday’s game 31-10 at halftime before dominating the rest of the game. The Sooners took the lead on a field goal by Gabe Brkic in the final minute, then linebacker Nik Bonitto sealed the victory with an interception.

The comeback, in part, came from the experience of rallying against Kansas State earlier this season. The Wildcats led 48-23 in the fourth quarter before Oklahoma closed with 18 straight points to make it close. That made it easier to keep the players focused when things got tough against Baylor.

“A lot of our message stayed the same,” Riley said. “That was just continuing to trust the original message even though this isn’t going the way we want it to, and honestly, probably a large portion of it was that, and I think we were able to draw back on our experience at Kansas State.”

Riley believes the tests could be helpful as the Sooners try to close out a championship run. The eighth-ranked Sooners host TCU on Saturday.

“We've developed some toughness,” he said. “I think we've come together in maybe a little bit of a different way as a team over the last several weeks. It sets the stage to go play well at the end, but we still have to go do it.”