No. 8 Oregon rolls into Colorado on 7-game winning streak 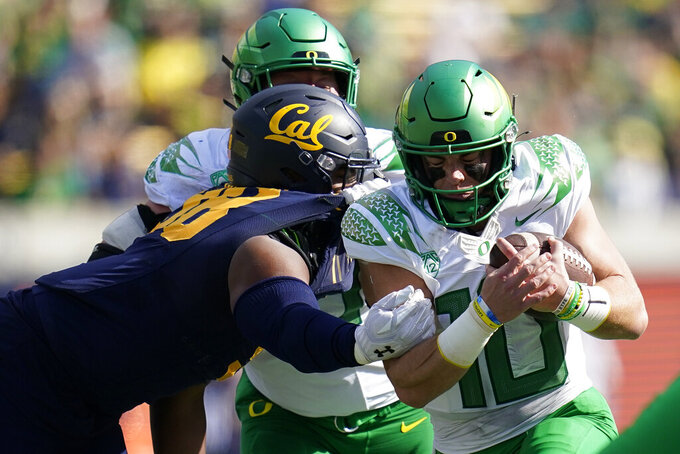 Oregon quarterback Bo Nix (10) runs the ball as California defensive end Nate Burrell (98) tries to tackle him during the first half of an NCAA college football game in Berkeley, Calif., Saturday, Oct. 29, 2022. (AP Photo/Godofredo A. Vásquez)

On assessing his team after a 42-24 win over Cal last weekend: “We could have played better.”

On his definition of success going forward: “Win.”

See, to the point.

The eighth-ranked Ducks (7-1, 5-0 Pac-12, No. 8 CFP) roll into Boulder on Saturday against Colorado (1-7, 1-4) on a seven-game win streak. They’re a 31 1/2-point favorite, according to FanDuel Sportsbook, in what on the surface appears to be nothing more than a cakewalk.

After all, this is an Oregon team averaging more than 40 points since a 49-3 loss to No. 1 Georgia to open the season. They’re clicking in every way possible behind the play of quarterback Bo Nix, who’s going against a Buffaloes defense allowing 483.8 total yards per game. Nix enters as the conference's back-to-back reigning offensive player of the week after his six-touchdown performance against Cal (three passing, three rushing).

Not that they're taking the Buffaloes lightly. On the contrary: Lanning’s been impressed with his team’s ability to focus on the task at hand.

“That’s kind of been our mantra from day one," Lanning said. “Our guys have done a good job of accepting that.”

The Ducks will be the first team the Buffaloes play this season already in the rankings. They did face TCU, Minnesota and UCLA, which eventually climbed into the Top 25.

History lesson: The Buffaloes are 4-33 against AP Top 25 teams since joining the league in 2011, according to Pac-12 research. Interim coach Mike Sanford went into motivational mode to inspire his team.

The strategy of tuning out the noise was essentially what led to their only win of the season — an overtime thriller over Cal — on Oct 15.

“Any magic calls? No, not necessarily,” Sanford said of the victory. “We tightened some things up and we just played incredibly hard.”

A year ago, Colorado receiver Daniel Arias was going against defensive back Christian Gonzalez in practice. Now, it will be on game day. Gonzalez transferred to Oregon and has become an integral part of the Ducks' defense. Gonzalez has seven pass breakups.

Lanning lauded the performance of Sanford, who stepped in after the team let Dorrell go on Oct 2.

“Coach Sanford is doing a really great job of trying to rally the troops,” Lanning said. “I know the results haven’t been what they always wanted but this team hasn’t mailed it in by any means. They’re still working hard.”

Colorado QB J.T. Shrout keeps improving with each game. He threw for a career-best 222 yards last weekend against Arizona State, along with two touchdowns.

“There are times where he almost skips level 100 to go to level 800 courses,” Sanford explained. “For him, it’s more about simplifying his pre-snap thought process.”

Lanning doesn’t mention the CFP rankings as the Ducks look to start 8-1 for a third time in four seasons.

“Control what you can control,” Lanning said. “I’m not going to spend any time worrying about that.”

ONLY WAY IS UP

“If we play with better execution than our opponent we have a chance," Sanford said.