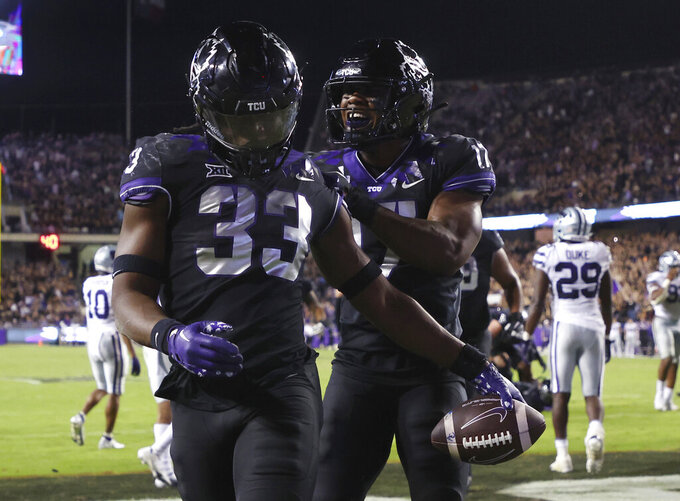 TCU running back Kendre Miller (33) and teammate Trent Battle (17) celebrate a touchdown against Kansas State during the second half of an NCAA college football game Saturday, Oct. 22, 2022, in Fort Worth, Texas. (AP Photo/Richard W. Rodriguez)

FORT WORTH, Texas (AP) — Max Duggan, Kendre Miller and their TCU teammates certainly don't get fazed by double-digit deficits in the second half. For the second week in a row, they just came back to win and stay undefeated.

Duggan threw for 280 yards with three touchdowns and Miller ran for 153 yards and two scores as eighth-ranked TCU beat No. 17 Kansas State 38-28, overcoming an 18-point deficit on Saturday night to take over sole possession of first place in the Big 12 Conference.

“Everybody’s calm and it’s a good feeling,” Miller said. "When we went down ... I was just like we’re fixin’ to get it going.”

The Frogs, with new coach Sonny Dykes, have won four consecutive games over ranked opponents. Three in a row was already a first in school history, which they accomplished a week earlier at home by overcoming a 17-point deficit to beat then-No. 8 Oklahoma State in double overtime.

Duggan's 55-yard strike to Quentin Johnston late in the third quarter put the Horned Frogs (7-0, 4-0 Big 12) ahead to stay. That was their third consecutive TD drive.

“We are playing with a lot of confidence ... there’s no sense of panic,” Dykes said. "And that gives you a chance when you always believe that you can figure out a way to win. And more often than not, you’re going to.”

Kansas State (5-2, 3-1) jumped ahead 28-10 when Will Howard threw for two touchdowns and ran for another after taking over for banged-up quarterback Adrian Martinez on its second drive. Deuce Vaughn's 47-yard run for his first touchdown in five games capped the fourth consecutive TD drive for the K-State.

“Proud of Will Howard. I thought he played a good football game,” K-State coach Chris Klieman said of the third-year quarterback who hadn't played since Martinez transferred from Nebraska and didn't take any first-team snaps this week in practice.

Howard, who started 10 games the past two seasons, ran for 14 yards on his first play and completed his first seven passes for 156 yards. He finished 13 of 20 for 225 yards, leaving the game briefly after hurting his shoulder on a running play late in the third quarter. Freshman Jake Rubley, the third K-State QB in the game, threw an interception on his first pass that came after TCU had gone ahead to stay.

Miller scored on a 2-yard run on fourth-and-1 on the opening drive of the second half to get TCU within 28-24, after Jared Wiley's 4-yard TD catch that ended a 91-yard drive just before halftime. Miller scored a 9-yard TD in the fourth quarter.

“Having two games that back to back where you kind of come back against really good opponents, against well-coached teams, and just keep keep clawing back and find a way to win ... It shows a lot about this team,” said Duggan, who also had a 65-yard catch-and-run touchdown by Derius Davis on TCU's first drive.

Several Wildcats players that got dinged up in their last game two weeks ago at Iowa State. Martinez was good to start and had a 19-yard keeper on the first play, but was in the locker room for an undisclosed issue before they had the ball again.

“The frustrating part is I don’t know how bad those guys are hurt,” Klieman said.

Kansas State: The Wildcats had won three in a row since a 21-7 home loss Sept. 17 to Tulane, a team that this week got ranked for the first time since 1998. The open date apparently wasn't enough to heal up the lingering issues for Martinez and the other players. Vaughn, who missed the end of the 10-9 win at Iowa State after getting leg-whipped, went to the locker room during the first half at TCU, but returned and had some nifty runs.

TCU: The Frogs had lost three in a row to Kansas State without scoring more than 17 points in any of those games. Duggan, who lost the starting role going into the season, finished 17-of-26 passing and has thrown a Big 12-best 19 touchdowns with only one interception since taking back over when Chandler Morris got hurt in the opener.

RUN TO SCORE Miller has a rushing touchdown in every game this season, and has run for more than 100 yards in four of the last five. He has run for TDs in eight consecutive games, the second-best streak in school history behind LaDainian Tomlinson's 15 in a row that ended in 2000.

The Frogs could move up a spot since No. 7 Ole Miss and No. 9 UCLA, the teams they were between, suffered their first losses Saturday. Kansas State is sure to drop some, but should still be ranked when the new poll comes out Sunday.

Kansas State is home against No. 11 Oklahoma State (6-1, 3-1) next Saturday in a matchup of second-place teams.

TCU plays three of its next four game on the road, the first next Saturday at West Virginia (3-4, 1-3).