No. 8 Tennessee visits No. 25 LSU to highlight SEC action 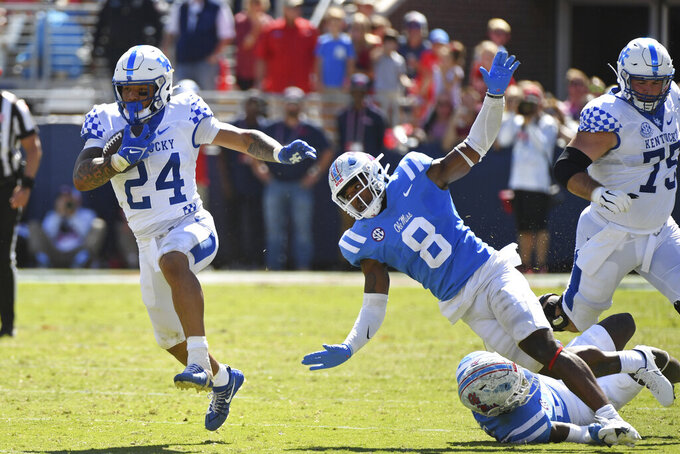 A look at Week 6 in the Southeastern Conference:

Quarterback Hendon Hooker leads the nation's top offense into Tiger Stadium, where the last three meetings haven't been settled until the last play. The Tigers have won four straight, overcoming double-digit deficits to beat both Auburn and No. 23 Mississippi State. It's the first time both have entered the game ranked since the 2007 SEC title game, when the fifth-ranked Tigers beat No. 14 Tennessee 21-14. LSU has won the last five meetings. Tennessee is leading the nation with 559.3 yards total offense and 365.8 passing yards per game. LSU's defense hasn't allowed a point in 14 consecutive second-half possessions. Volunteers coach Josh Heupel is 6-1 after open dates, incuding a 45-42 road win over No. 8 Kentucky last season. Tennessee is a three-point favorite.

It may not shape up as the most competitive game on the docket, but the storylines are too juicy to pass up. Both starting quarterbacks, the Crimson Tide's Bryce Young and the Aggies' Max Johnson, are nursing injuries. The Aggies were the only team to beat Alabama in the 2021 regular season, and the circumstances are similar this go around. That doesn't even count the offseason when Texas A&M coach Jimbo Fisher took serious issue with comments from the Tide's Nick Saban on how the Aggies produced the nation's top recruiting class. Sure, the Tide are favored by 23 1/2 points, but it's still got the makings of a game to watch.

Hendon Hooker, QB, Tennessee. The Heisman Trophy contender has passed for a touchdown in 16 consecutive games, the program's second-longest streak behind Heath Shuler's 18. Hooker is coming off his best game in leading the Vols to their first win over Florida since 2016. He passed for 349 yards and two touchdowns and rushed for 112 and another score.

Quarterback Will Rogers and the Bulldogs are riding high from a 42-24 win over then-No. 17 Texas A&M and are 8 1/2-point favorites. That vaulted them into the rankings while the Razorbacks fell out with their second straight loss. But Arkansas, a one-time top 10 team, fell only 23-21 to the Aggies despite giving up a touchdown on a long fumble return and missing a late field goal. The Razorbacks then wiped out most of a 28-0 deficit before falling 49-26 to Alabama. The big question is the health status of Arkansas quarterback KJ Jefferson, who left late in the ‘Bama game after hitting his head and didn’t practice early in the week.

LSU has won 13 of its last 14 home games against SEC East teams. That hot streak dates back to the 2010 Tennessee game. ... Kentucky running back Chris Rodriguez Jr. returned from a four-game suspension last week to rush 19 times for 72 yards and a touchdown at Ole Miss. He has 2,812 career yards and is 80 away from fifth on the school’s all-time list. ... Mississippi State cornerback Emmanuel Forbes leads the SEC with three interceptions, including two against Texas A&M. His 33-yard pick-6 was the fourth of his career, breaking the school record.