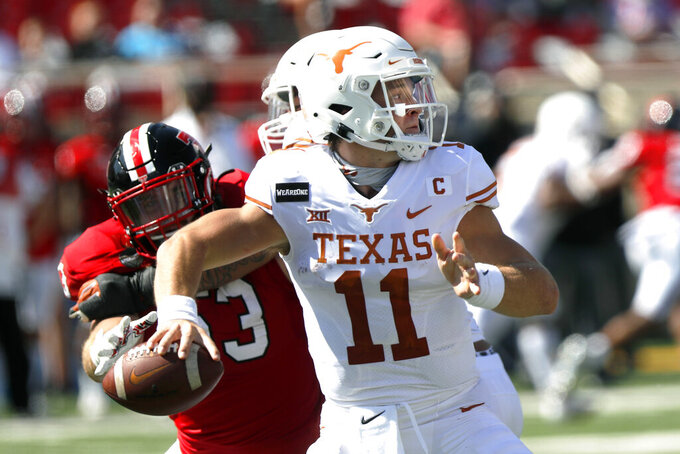 LUBBOCK, Texas (AP) — Texas was trailing Texas Tech by 15 points with just more than 3 minutes to play when Sam Ehlinger walked over to his coach and delivered a message.

The No. 8 Longhorns weren't out of it, the senior quarterback said. Far from it. Texas would leave the field a winner.

“(He) looked at me and said, 'They left us too much time. We're going to tie this thing up and win in overtime," Herman said. “And I believed him.”

So did the rest of the Longhorns.

Ehlinger delivered on his promise, rallying Texas from a 56-41 deficit in the final 3:13 with touchdown passes to Brennan Eagles and Joshua Moore to force overtime, then finding Moore for another touchdown in a wild 63-56 victory.

Texas Tech thought it had the game put away late behind a diving touchdown catch by T.J. Vasher and a 75-yard touchdown run by SaRodorick Thompson Jr.

Ehlinger just looked at the clock and did his thing with a brilliant finish.

Ehlinger first connected with Eagles for a touchdown and the Longhorns snagged the onside kick when the ball bounced high and slipped through the hands of a Red Raiders player. After finding Moore for another score to get within 56-54, Ehlinger passed to Eagles again for the 2-point conversion.

Texas got the ball first in overtime and the Ehlinger-to-Moore connection did it again. Texas Tech's only possession ended with Alan Bowman forced to scramble before his pass was intercepted by Caden Sterns on fourth down.

“We learned we’re never out of it. You look around college football in 2020, there’s some weird things going on,” Ehlinger said. “All I can say is wow.”

Ehlinger finished with 262 yards passing with five touchdowns and also ran for a score. Bowman passed for 325 yards and five touchdowns for the Red Raiders (1-1, 0-1) but also threw three interceptions.

Texas: Ehlinger keeps spreading the touchdowns around his receiving corps but Moore is rapidly turning into a go-to favorite target after missing the 2019 season while under team suspension. Moore finished with five catches for 73 yards and three touchdowns.

“I’m so proud of Josh, everything he’s gone through. I love him. I told him that after the game," Ehlinger said.

Texas Tech: The Red Raiders were on the brink of delivering second-year coach Matt Wells a signature win over a Top 10 team and big rival. Blowing a two touchdown lead in the final 3 minutes could crush a team's confidence. Bowman's big day was overshadowed by the three interceptions. The first two set up Texas touchdowns in the first half before the last one ended the game.

The Longhorns could be rising. Although it wasn't always impressive, the big comeback and two teams ranked higher than Texas losing Saturday only helps their chance to move up.

“We had a couple of players say in the locker room that great teams have a game or two like this,” Herman said.

The win and final defensive stand in overtime will overshadow an otherwise rough day for the Texas unit under new coordinator Chris Ash, Herman's friend who was brought in after he was fired as head coach at Rutgers. Herman bemoaned an afternoon of missed tackles and five touchdown passes surrendered.

“To find a way to win this thing, a lot of confidence can come from that, but also a lot of humility," Herman said. "Hopefully this humbles some guys.

It was a wild day on special teams for both teams. Both teams recovered onside kicks. Texas Tech scored on a punt return fumble and Texas scored off a touchdown off a blocked punt.