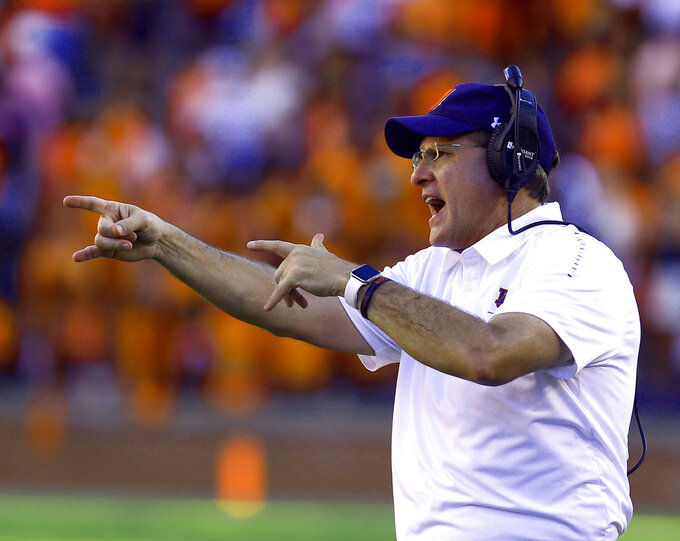 Auburn head coach Gus Malzahn reacts during the second half of an NCAA college football game against LSU, Saturday, Sept. 15, 2018, in Auburn, Ala. (AP Photo/Butch Dill)

AUBURN, Ala. (AP) — The Auburn Tigers are racking up too many big penalties and not enough big plays.

The combination already has hindered the ninth-ranked Tigers in a close win against No. 10 Washington and a loss to No. 6 LSU .

Auburn (2-1, 0-1 Southeastern Conference) faces a big hole in its bid to repeat as Western Division champion, thanks to a brutal road schedule. First things first: The Tigers face Arkansas (1-2, 0-0) on Saturday night with plenty of things to work on before even thinking about those road trips to No. 14 Mississippi State, No. 2 Georgia and No. 1 Alabama.

Take away Auburn's mismatch against Alabama State of the FCS, and the Jarrett Stidham-led offense has produced only six plays of 20-plus yards, or explosive plays. The Tigers edged Washington 21-16 and lost to LSU 22-21 on a field goal as time expired, creating another entry in a string of slow starts for the Auburn offense.

"When we're at our best, we have more explosive plays," coach Gus Malzahn said. "That's something that we'll be working hard to do.

"That and being able to run the football effectively. I think we'll see this team grow in the running game. Those are really the two things. They go together. When you're able to run the ball, it changes things and opens up more explosive opportunities. And if you hit a couple, vice versa the other way."

It is not helping matters that Auburn is the most penalized team in the SEC, getting flagged 21 times for a total of 222 yards against Washington and LSU. That includes two pass interference penalties on LSU's game-winning drive.

"It's frustrating because it's not something that we do," linebacker Deshaun Davis said. "We've got to correct that. That's not Auburn football. That's not how we want to play at all. The things that we're doing wrong on the technique end of it, we have to fix because obviously it's hurting our team on the defensive side of the ball and on the offensive side of the ball."

Auburn had high expectations with Stidham back, despite the loss of star tailback Kerryon Johnson and key departures on the offensive line. The Tigers are increasingly relying on freshmen to make plays offensively.

Auburn also is considering a change at center, with Nick Brahms competing with starter Kaleb Kim.

Redshirt freshman JaTarvious Whitlow has taken over the bulk of the carries in the backfield off the bench. Kam Martin, the top returning rusher, has only nine carries in the past two games while freshman Shaun Shivers started against LSU.

The receiving corps also has undergone a youth movement. Ryan Davis is averaging just 8.4 yards on a team-high 13 catches after setting the school record with 84 receptions last season.

"I think any time you can get an explosive play, it kind of ups your tempo, ups your game a little bit," Stidham said. "I think that's something we really need to focus on, trying to get a little bit more explosive plays. But at the end of the day, we're going to take what the defense gives us.

"You can't try and force too many things. We'll just take a look at it and see what we can do."