No. 9 Coastal Carolina, No. 23 Liberty meet in Cure Bowl 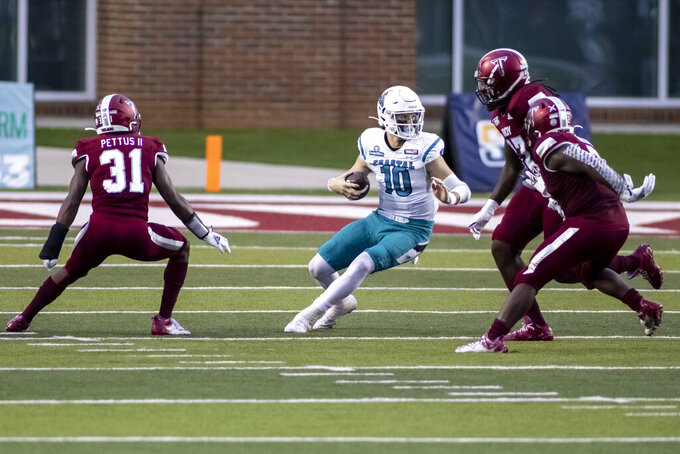 No. 9 Coastal Carolina should be motivated after being ranked 12th in the latest College Football Playoff rankings despite being one of just five undefeated teams in the nation. No. 23 Liberty is seeking to win the Cure Bowl for the second consecutive year, complete the best season in program history and finish ranked in the Top 25.

The game could come down to which defense has the most success stopping the run. Liberty is eighth in the nation in rushing at 252.1 yards per game. Coastal Carolina averages 223.2, 15th in the country.

Coastal Carolina: Running back CJ Marable has rushed for 844 yards and 12 touchdown.

Liberty: Former Auburn quarterback Malik Willis has thrown for 2,040 yards, while also gaining a team-leading 807 yards on the ground.

This is the first Top 25 matchup in the Cure Bowl's six-year history. ... Kickoff was moved from noon to prime time after the pairing was announced. ... Coastal Carolina is making its first bowl appearance. ... The one-time Big South rivals were scheduled to play on Dec. 5, but the game was canceled due to COVID-19 protocols. ... Coastal Carolina has a 12-game winning streak, dating to last season. That is tied with top-ranked Alabama for the longest current winning streak in the nation. ... Liberty started 8-0 before suffering its lone loss, 15-14 at North Carolina State on Nov. 21.