No. 9 Florida looks to bounce back at South Carolina 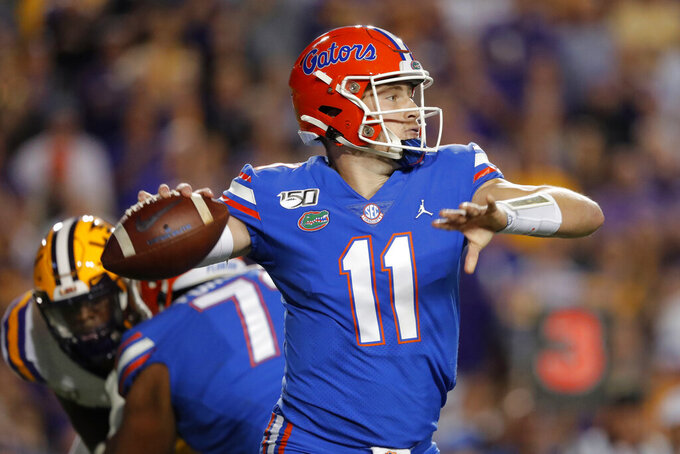 The Gators continued run in the SEC where they enter the last half of the season playing for a spot in the league title game and the College Football Playoff. But the Gamecocks have knocked off one top-10 team in Georgia last week, and are looking for a second one.

Florida's defense vs. South Carolina QB Ryan Hilinski. The Gators lead the SEC with 26 sacks and 12 interceptions and Hilinski, a freshman, is coming off a game at Georgia where he sprained his left knee. South Carolina coach Will Muschamp said he sat Hilinski the final quarter and overtime because he was worried about his mobility to escape the pass rush. Even a 100-percent healthy Hilinski will have to be mindful with Florida's front four coming after him.

Florida: QB Kyle Trask has kept the Gators on track after taking over for Feleipe Franks, lost for the season due to injury. Trask has thrown 10 touchdowns against just three interceptions.

South Carolina: S Israel Mukuamu was named the SEC defensive player of the week after getting three interceptions off Jake Fromm in the Gamecocks 20-17, double OT win over Georgia.

Florida has started 6-1 in both of Dan Mullen's seasons as coach. ... South Carolina has won five of its past nine games with Florida after going 4-26 in the teams' first 30 meetings. ... Gamecocks receiver Bryan Edwards has caught a pass in all 44 games he's played, surpassing the school record of 43 straight set by the late Kenny McKinley. ... Florida threw four TD passes (three of them by Trask) in a 42-28 loss at No. 2 LSU, the first time the Gators had that many scoring throws in a game since 2007. ... Trask joined Gator greats Tim Tebow and Rex Grossman as the only Florida quarterbacks to throw for more than 300 yards against a Top 25 opponent since the start of the 2000 season. Trask threw for 310 yards in the LSU loss.