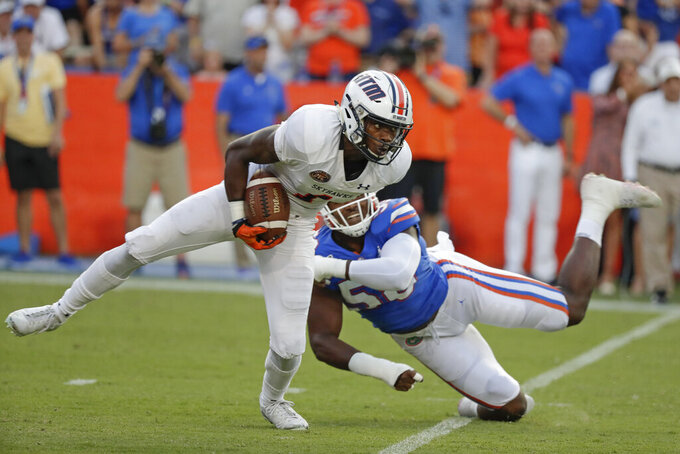 Florida seeks its seventh consecutive victory dating to last season. The Gators also aim to avenge last year's 27-16 loss in The Swamp as they begin Southeastern Conference play. Kentucky seeks its first home win against the Gators since 1986 and consecutive series wins for the first time since 1976 and '77.

Florida's pass rush vs. Kentucky's offensive line. The Gators enter the contest leading FBS schools with 15 sacks, including 10 in the opener against Miami. DL Jabari Zuniga leads the team with three while four others have at least 1.5 each. They face a veteran Wildcats line that has yielded just three sacks thus far. Pass protection is particularly important for Kentucky as junior transfer Sawyer Smith makes his first start at quarterback in place of injured Terry Wilson, who is out for the season after tearing his left patellar tendon last week against Eastern Michigan.

Florida: QB Feleipe Franks. The junior has thrown for at least 250 yards in both victories and four of the Gators' last five contests. He was near-perfect in a 45-0 rout of UT Martin, completing his first 15 passes and 25 of 27 overall for 270 yards and two touchdowns.

Kentucky: WR Lynn Bowden. The versatile junior recently surpassed 1,000 career yards receiving and is three receptions from reaching 100 overall. The punt and kick returner is also a passing option out of the Wildcat formation with Wilson done for the season and little experience behind Smith. The former high school QB even completed a 32-yard pass to Wilson last week to set up Kentucky's first TD.

Florida will play without WR Kadarius Toney and CB CJ Henderson because of shoulder and ankle injuries, respectively. ... The Gators have surpassed 500 yards of offense in four of their past six games. .... Florida's 31-game winning streak was the fourth-longest in an uninterrupted series in NCAA history until Kentucky won last fall in Gainesville. ... Kentucky coach Mark Stoops (38-39) can reach .500 career wins as a head coach.