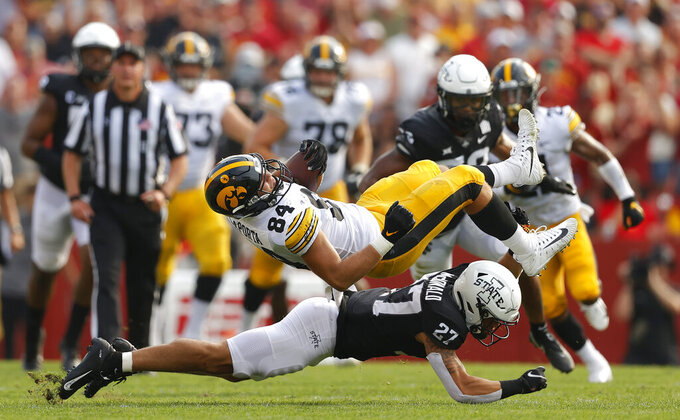 AMES, Iowa (AP) — Iowa defensive end Zach VanValkenburg and offensive lineman Jack Plumb marched across the end zone with the Cy-Hawk Trophy perched on their shoulders, showing it off to the Hawkeyes fans who had come to Jack Trice Stadium to see the biggest game in the history of the rivalry with Iowa State.

The trophy checks in at about 90 pounds and for all the progress the ninth-ranked Cyclone have made in recent years, they just can't pry it away from the Hawkeyes.

Jack Campbell returned a fumble 6 yards for a touchdown and No. 10 Iowa ran its winning streak against Iowa State to six games with a 27-17 victory Saturday that ruined the most-anticipated home game in Cyclones history.

In the first Cy-Hawk game matching ranked teams in 65 total meetings, the Hawkeyes (2-0) were not about to play the foil for Iowa State's feel-good story.

The Cyclones (1-1) hosted ESPN's "GameDay," and after years of mediocrity — at best — they came into this season ranked in the top 10.

Ames was rocking, but the rivals from across the state sucked the life out of Jack Trice.

“You really can't describe it until you're in it,” Jacobs said. "Just to get that win in hostile territory fills you with emotion."

“Polls in September, they really don’t mean a lot,” Iowa coach Kirk Ferentz said. “But for us it’s all about building a team.”

This Iowa team looks like a contender in the Big Ten thanks to its defense.

“You talk about physicality, that's what you do at Iowa," said Campbell, who had eight tackles and half a sack.

The Hawkeyes used the same formula as last week when they had two defensive touchdowns in a rout of Indiana, another upstart program looking to build off 2020's success.

The Cyclones came into this season with sky-high expectations, a loaded and experienced roster and hot-commodity coach. One significant milestone has eluded Iowa State during its program renaissance and four straight winning seasons of under Matt Campbell: A victory against Iowa.

Maybe the Cyclones will have better luck in the Big 12 because the Hawkeyes remain heartbreakers.

“Somewhere along the line I have failed this team to be prepared for this moment,” said Campbell, who fell to 0-5 against Iowa. “I think the lack of execution really falls on my shoulders.”

With the Cyclones backed up to their goal line, All-American Breece Hall was stripped by Jacobs. Campbell scooped the bouncing ball and took a couple of strides into the end zone to make it 21-10 with 5:08 left in the third quarter.

The Hawkeyes celebrated while Hall was face down on the turf for a few extra seconds, frustrated by a critical mistake. One that has become so common in this series for Iowa State.

Hall was held to 93 total yards and a touchdown on 20 touches.

Matt Hankins had two of Iowa's three interceptions against Brock Purdy, who was benched for Hunter Dekkers early in the fourth quarter.

Hankins' second pick at the end of the third quarter left the Hawkeyes in Iowa State territory and seemed to kill all hope for the Cyclones' sellout crowd of 61,500.

The hype song “Jump Around” blared inside Jack Trice Stadium heading into the fourth quarter, but it hardly caused a stir in the stands on a hot, mercifully overcast day in Ames.

The Hawkeyes' offense managed just 173 yards, but it was good enough.

Iowa: The takeaway is all about takeaways for Iowa against Iowa State. In the past five meetings, Iowa is plus-9 in turnover margin with no giveaways.

Iowa State: Purdy is a four-year starter and a huge part of Iowa State's turnaround, but he has been flummoxed by the Hawkeyes. He finished 13 for 27 for 138 yards in this one.

Dekkers is considered the future, a second-year freshman. Playing against an Iowa defense that was playing it safe, he went 11 for 16 for 114 yards and a touchdown.

Campbell tried to quell any talk of a quarterback controversy, backing Purdy.

“If I know Brock Purdy, he'll bounce back better than ever,” Campbell said.

Iowa might be the highest-ranked team in the Big Ten when the new Top 25 comes out Sunday.

Iowa State: The Cyclones go to UNLV to close out the nonconference schedule for the first of two straight weeks road games.

Follow Ralph D. Russo at https://twitter.com/ralphDrussoAP and listen at https://APpodcast.com