No. 9 Oklahoma knows Iowa State no longer a Big 12 doormat 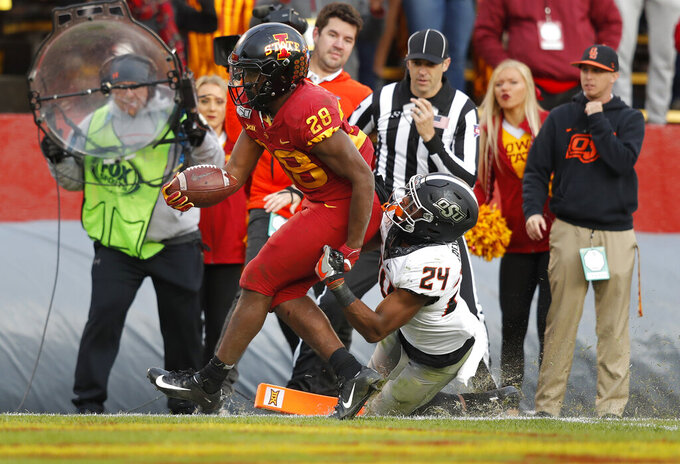 The Cyclones upset the Sooners 38-31 in Norman in 2017 and now Iowa State (5-3, 3-2 Big 12) visits Oklahoma again Saturday not nearly the underdog it was two years ago. Matt Campbell has a 21-13 record coaching the Cyclones the past three seasons, with several wins over ranked opponents.

"Competitive each and every game," Oklahoma coach Lincoln Riley said. "Seems like they always give themselves a chance to win. I think that's one of the biggest compliments you can give any coach, is if they're able to do it with different people and sustain it, and he's certainly done that there."

Oklahoma (7-1, 4-1, No. 9 CFP) is coming off a 48-41 loss to Kansas State two weeks ago that could cost them a shot at a College Football Playoff spot. The ninth-ranked Sooners tried to iron out kinks during a bye week so they can make a run and try to keep up with league-leading Baylor.

"I think we got a lot of good work in, kind of got the opportunity to re-evaluate ourselves and refocus and attack what's to come," Oklahoma quarterback Jalen Hurts said.

Iowa State still could position itself for a spot in the Big 12 championship game. The Cyclones might be in better shape, but star quarterback Brock Purdy threw three interceptions in the fourth quarter of a 34-27 loss to Oklahoma State two weeks ago.

"What's gone well — we've played a lot of really good football through eight football games," Campbell said. "What hasn't gone well is when we're not playing our best, some of our detail and our discipline slip."

Hurts and Purdy are among the nation's most productive quarterbacks. Hurts leads the nation in passer efficiency and ranks second in total offense and third in yards per carry. Purdy ranks third nationally in yards passing per game (320.9). They are the top two players in the Big 12 in total offense, with Hurts' rushing yards putting him ahead of Purdy.

Oklahoma usually pounds the ball at this time of year, though no workhorse back has emerged this season. Kennedy Brooks with 384 yards, followed by Trey Sermon with 371 yards and Rhamondre Stevenson with 357. All three are listed as co-starters on the depth chart. All have had their moments this season and are threats to break out.

Iowa State has three losses this season — by one point to Iowa, by two points at undefeated Baylor and by seven points at Oklahoma State.

"They've lost three games this year, all of them one-score games and certainly watching those games, you could make an argument probably should've won at least a couple of them," Riley said. "Very, very capable."

Iowa State freshman running back Breece Hall ranks second in the Big 12 with 98.2 yards rushing per game during conference play. He rushed for 132 yards and three touchdowns against West Virginia, followed that with 19 carries for 183 yards and two scores against Texas Tech, then had 18 carries for 76 yards and two more scores against Oklahoma State. If he can provide some balance for the Cyclones, the Sooners could struggle to defend them.

On Oct. 7, 2017, Kyle Kempt passed for 343 yards and three touchdowns, including a 25-yarder to Allen Lazard for the game winner in a stunning victory over the third-ranked Sooners. Joel Lanning played both quarterback and linebacker. He ran for 35 yards, passed for 25 and had eight tackles, a sack and a fumble recovery. He played 78 snaps. Iowa State went on to finish that season with an 8-5 record, its highest win total since 2000. The Cyclones went 8-5 again in 2018.

"Obviously, winning and beating an opponent like this — it's always a great challenge to be able to do that," Campbell said. "It was big for our football team at that time. I think the reality is that whole year was really big for Iowa State football."