No. 9 Oklahoma, Murray at TCU looking to overcome 1st loss 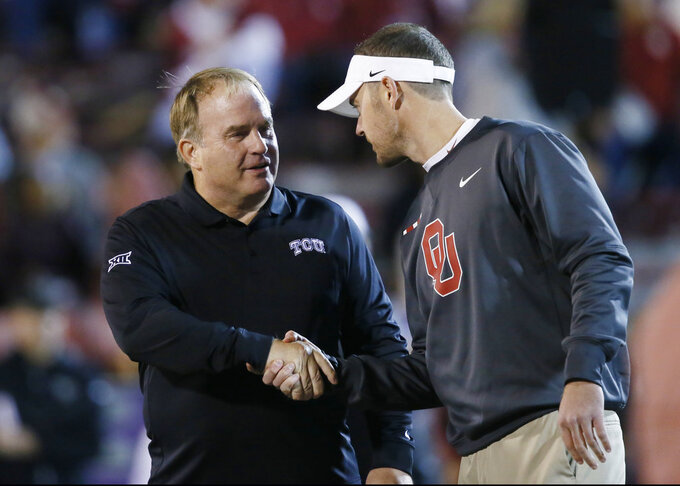 FORT WORTH, Texas (AP) — Kyler Murray has had nearly two weeks to stew over his first loss as Oklahoma's starting quarterback.

"After the game I probably said about six words," Murray said. "But I think losing that game is definitely a learning lesson. ... I can only learn from it and get better from it."

The ninth-ranked Sooners have dropped out of and gotten back into the top 10, defensive coordinator Mike Stoops has been fired and Murray has been tabbed the AP midseason Big 12 offensive player of the year since their loss to Texas on Oct. 6 at the State Fair of Texas.

Murray and the Sooners (5-1, 3-1 Big 12) are back in the Dallas-Fort Worth area on Saturday to play at TCU (3-3, 1-2). It is a rematch of last year's Big 12 championship game that already looks much different than their two meetings last year when both were top-10 teams both times.

Both now are coming off losses. TCU has already matched its loss total from last year, when two of those three losses were against Oklahoma.

"With two good defenses last year, the best we could do is hold them to 38 (points)," TCU coach Gary Patterson said. "So we've got work to do."

Plus, Murray provides a bit of a different challenge than Baker Mayfield, the Heisman Trophy winner he succeeded. The dual-threat junior and first-round MLB draft pick is the Big 12's most efficient passer with 21 touchdowns and only three interceptions. He has completed 96 of 135 passes (71 percent) for 1,773 yards, and run for another 377 yards with five more scores.

"As a general rule, he can just take off on you and most people on the field can't catch him," Patterson said.

The Sooners trailed Texas 45-24 in the fourth quarter before Murray led them to three touchdowns in a six-minute span, including his 67-yard run on a one-play drive, to tie the game before the Longhorns won 48-45 on a field goal with nine seconds left .

"He took it really hard. He did. Most of the really good ones I've been around do," Sooners coach Lincoln Riley said of how Murray reacted to the loss. "But I think there's kind of a renewed focus. I think he's excited about some of the things that he's done and we're doing offensively."

TCU faces the Big 12's highest-scoring team for the second game in a row. The Sooners average 48 points a game, the same as Texas Tech did before its 17-14 win at TCU on Oct. 11. The Red Raiders were held 31 points below their scoring average, and their 353 total yards were 248 less than their national-best average of 591 going into the game.

The Sooners' 17-game true road winning streak is the longest of its kind in the country — no other Power Five team has more than five in a row. Their last such loss was 37-33 at TCU four years ago. ... TCU has scored 17 points or less in three consecutive games for the first time since 2006. ... The Horned Frogs are last in the Big 12 in turnover margin, with only six takeaways against 15 turnovers. ... Oklahoma and TCU are playing for the third time over a 12-game span in less than a year.

Safety Innis Gaines, TCU's second-leading tackler with 31, will miss Saturday's game and maybe the rest of the season because of an apparent left leg injury suffered against Texas Tech. He also had an interception and six pass breakups.

Oklahoma sophomore linebacker Kenneth Murray was named the Big 12 midseason defensive player of the year. His 74 total tackles are second only in the Big 12 to fellow Sooners linebacker Curtis Bolton.