No. 9 Tennessee eyes 10-win season in visit to Vanderbilt 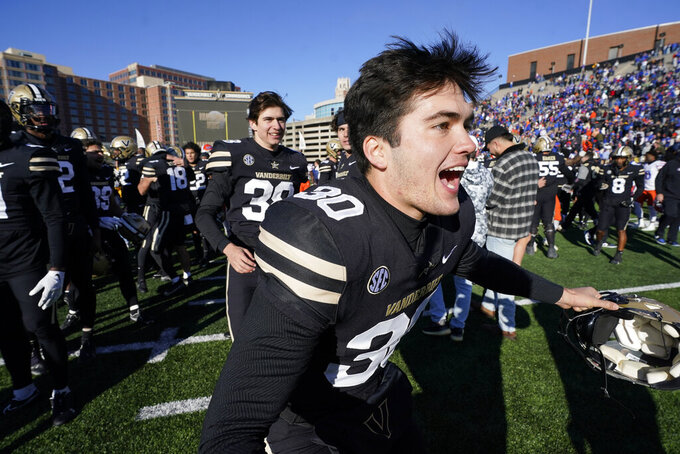 Tennessee’s chance at a berth in the College Football Playoff is most likely gone, but the Volunteers can still post the program’s first 10-win regular season since 2003. (Tennessee hasn’t won 10 total games in a season since 2007.) The Vols have won three straight against in-state rival Vanderbilt. The Commodores needs a victory to become bowl eligible for the first time since 2018 in coach Clark Lea’s second season. A win would be the Commodores’ third straight, all against SEC teams. It’s a big turnaround for Vanderbilt after snapping a 26-game skid against league competition earlier this month at Kentucky.

Tennessee has been the nation's top offense with 540.4 total yards and 46.5 points a game while ranking second in passing offense, averaging 348.8 yards per game. That was with Hendon Hooker, who tore his left ACL in last week's loss to South Carolina, under center. The Vols lead the SEC in eight different offensive categories and have scored a program record 512 points. Vanderbilt ranks 125th in total defense and 129th defending the pass — just ahead of Tennessee's passing defense at 130.

Tennessee: QB Joe Milton. This will be just his third start for Tennessee and first since Sept. 11, 2021. Milton, who has another year of eligibility remaining, is 23 of 33 for 573 yards with six touchdowns and no interceptions coming off the bench.

Vanderbilt: QB Mike Wright. Freshman AJ Swann is expected to practice, but coach Clark Lea said who starts tips to who gives the Commodores the best chance to win. Wright is coming off back-to-back SEC wins as their second-leading rusher with five TD runs. Wright also has thrown for 12 TDs and only four interceptions in nine games.

Tennessee is finishing the regular season with back-to-back road games for the first time since 1939 and only the second time in the SEC era. ... The Volunteers are ranked in the Top 10 for a ninth straight week, their longest stretch since the final nine weeks of the 2001 season. ... Coach Josh Heupel can become only the third Tennessee coach in 60 years to win 10 or more games in either his first or second season. Phillip Fulmer won 10 games in 1993, and Bill Battle did it in both 1970 and 1971. ... Heupel is 8-2 after a loss in his five seasons as a head coach. ... Tennessee WR Jalin Hyatt leads the nation with 15 TD catches; that is better than 37 FBS schools. ... The Vols have a plus-8 turnover margin that ranks first in the SEC and 11th in the FBS. ... Vanderbilt has won back-to-back SEC games for the first time since 2018. ... Vanderbilt leads the SEC and is tied for third in FBS with four defensive or special teams TDs this season. ... Vanderbilt WR Will Sheppard ranks second in the SEC with nine TD catches. ... Vanderbilt is tied for second in the SEC and tied for 13th nationally recovering 10 fumbles this season. ... Vanderbilt RB Ray Davis ran for 122 yards in the win over Florida, his fifth 100-yard rushing game and third straight this season. He ranks third in the SEC with 982 yards rushing this season.