No Rush: SEC team joining in on spread of air-based offense 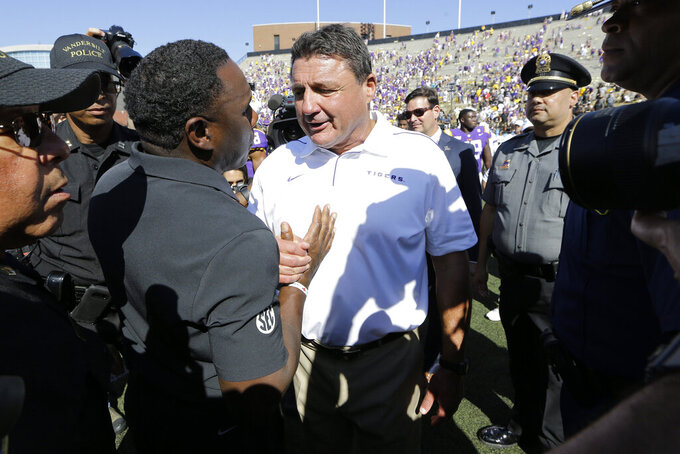 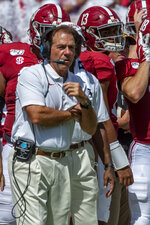 COLUMBIA, S.C. (AP) — The Southeastern Conference built its reputation for punishing ground games with one-name tailback megastars like Herschel, Bo and Emmitt — all larger-than-life performers who pounded the rock, piled up the yards and gave the SEC a down-in-the-dirt toughness no other league could match.

These days, the SEC action is not in the trenches but on the outside — where lightning-quick wideouts catch passes from quarterbacks making split decisions on the fly, often from empty backfields.

"It runs counter-intuitive to what (SEC) coaches will tell you about wanting to be balanced," CBS Sports college football analyst Gary Danielson said. "But things have changed."

That's an understatement for the SEC.

An eye-opening 12 of the league's 14 teams are gaining more yards this season in the air than on the ground:

— No. 4 LSU leads the way with quarterback Joe Burrow controlling an offense that's thrown for 1,727 yards, more than three times as many as its run for.

— No. 2 Alabama, quarterback Tua Tagovailoa has had consecutive games with five TD passes to his talented, fast group of receivers like Jerry Jeudy and Henry Ruggs III.

— And No. 3 Georgia, where its legacy of backs like Herschel Walker, Todd Gurley and Terrell Davis is cherished Between the Hedges, has spread things out a bit to gain most of its yard by the pass.

Vanderbilt coach Derek Mason said it's not complicated, he believes it's simple math: Why make someone in the backfield burst through six or seven defenders when you can let a skill player slip one tackler and break off a big play.

"Most teams in the SEC are looking at their roster that way," he said.

The shift is based on the talented quarterbacks at the helm, said ex-Arkansas and Ole Miss coach Houston Nutt.

During his 14 years as a head coach, Nutt worked to defend I-formation runners and win the battle in the trenches. Now, with playmakers like Tagovailoa, Burrow and Fromm, there's always a threat on the outside that can't be matched by handing off 40 or 50 times a game, Nutt said.

"Right now, they're spreading them out and you've got to defend them," said Nutt, speaking after an appearance at the Knoxville QB Club.

South Carolina coach Will Muschamp, who coordinated a national title defense at LSU, believes the playing field has changed because of enhanced techniques of preparing high school players like seven-on-seven tournaments and individual training.

"I think that quarterbacks, skill players and defensive backs when you get them now, they're so much further along," he said.

Alabama coach Nick Saban has gone all in on the spread after winning five national titles with the likes of Heisman Trophy winners Mark Ingram and Derrick Henry at tailback.

Only two years ago, the Crimson Tide relied on runners Damien Harris and Bo Scarborough and quarterback Jalen Hurts to rush for 3,509 yards on the way to their last national crown. Alabama threw only 332 times that season, averaging less than 194 yards passing a game and scoring 28 TDs by pass — fewer than its 36 rushing touchdowns.

Things have flipped for Saban's Crimson Tide in a big way.

Behind Tagovailoa and its talented receiving corps, the Tide have thrown for twice as many yards (1,485 to 715) and touchdowns (18 to nine) as they've run for.

Then there's LSU which three years ago , had Leonard Fournette and Derrius Guice in the backfield and front and center of its offense. Fournette and Guice combined for 2,230 yards — nearly matching the Tigers' passing output of 2,281 — and 23 touchdowns.

This year, LSU ranks first in SEC passing and 13th in league rushing.

LSU's Burrow in the SEC leading in passing yards and total offense per game. His 17 passing touchdowns outstrip the Tigers ground total of 11.

Saban believes more talented skill players coming out of high schools and more creative play-calling to force defenses to cover who whole field instead of a tight center at the line of scrimmage have opened things up.

"I think the combination of those things probably has changed our league just like it's changed football in general."

But not everyone has given up on featuring the run.

No. 7 Auburn leads the SEC in rushing at 259.9 yards a game and tailback JaTarvious "Boobee" Whitlow is second in the league with 102 yards per game.

The Tigers have thrown for just six touchdowns, nearly half of the 11 it has scored on the ground this fall.

Mississippi State is the other SEC team that gains more on the ground than the air. Kylin Hill, a junior, leads the league at 137.8 yards per game as the only other rusher besides Whitlow averaging 100 or more yards a contest.

Danielson, the former quarterback who broadcasts SEC games for CBS, doesn't see the emphasis on speed and spread changing — unless defenses uncover better ways to slow them down.

"This is where the game has gone," he said, "and it's hard to see that changing back."