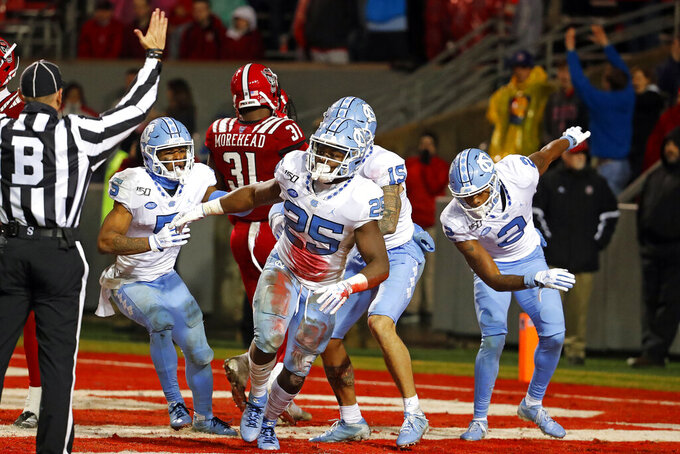 North Carolina's Javonte Williams (25) celebrates a touchdown against North Carolina State with teammates during the second half of an NCAA college football game in Raleigh, N.C., Saturday, Nov. 30, 2019. (AP Photo/Karl B DeBlaker)

North Carolina: QB Sam Howell was named the ACC’s rookie of the year after passing for 3,347 yards and a school single-season record 35 touchdowns.

Temple: QB Anthony Russo has thrown for 2,733 yards and 21 touchdowns this season and is fourth all-time at the school with 5,296 yards and 35 TDs passing.

North Carolina: Mack Brown returned as coach and helped make a difference on the field and in the ticket office. The Tar Heels sold out all of their home games and nearly upset unbeaten Clemson, which qualified for the College Football Playoff for the fifth straight time.

North Carolina: The Tar Heels are making their first bowl appearance since 2016, 34th overall (14-19), and first in the Military Bowl.

Temple: This is the Owls' fifth straight bowl game, ninth in school history (3-5) and third appearance in the Military Bowl.

By Will Graves 4 minutes ago
By Anne M. Peterson 4 hrs ago
4 hrs ago
By Greg Beacham 5 hrs ago
5 hrs ago