Northwestern looks to keep cycle going with another big jump 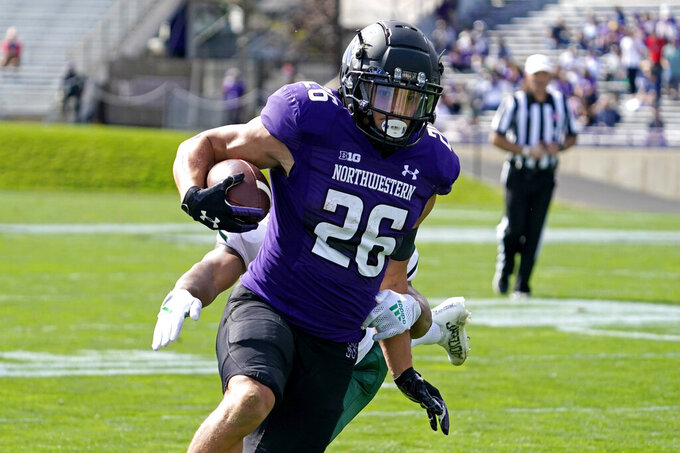 FILE - Northwestern running back Evan Hull (26) scores a touchdown past Ohio cornerback John Gregory during the first half of an NCAA college football game in Evanston, Ill., Saturday, Sept. 25, 2021. Northwestern is set to kick off its season on Aug. 27, 2022, against Nebraska. (AP Photo/Nam Y. Huh, File)

From winning the Big Ten West to crashing to the bottom of the division and then repeating the cycle, Northwestern has been following a wild pattern in recent seasons.

It's not the way coach Pat Fitzgerald drew it up. But he will take another big jump.

The Wildcats will try to extend the trend for at least one more season and pick themselves up again after going from winning the division to finishing last in 2021.

“I think, No. 1, we’ve got more experience maybe at this time than we did last year and more competitive depth than we had at this time last year,” Fitzgerald said.

A star linebacker on Northwestern's Cinderella run to the Rose Bowl in the 1990s, Fitzgerald is by far the Wildcats' winningest coach. He has led them to a 109-90 record and 10 bowl games since taking over in 2006. But the past four years, they've been up and down like a yo-yo.

Northwestern won the Big Ten West in 2018 and made its first appearance in the conference championship game. The Wildcats lost to Ohio State, then beat Utah in the Holiday Bowl to finish with a 9-5 record.

A year later, they went 3-9 and ended a string of four consecutive bowl seasons.

In 2020, they were back on top of the Big Ten West. They pushed Ohio State in the conference title game and beat Auburn in the Citrus Bowl to finish 7-2 in the pandemic-shortened season.

Last year, with an offense and defense that ranked among the worst in the Big Ten, they went 3-9 again and finished back at the bottom of the division with a 1-8 mark in conference play.

Fitzgerald is banking on more experience and depth on both sides to propel another even-year jump.

If the Wildcats are going to make a move, they'll need better quarterback play.

Ryan Hilinski returns for his second season at Northwestern after transferring from South Carolina. And he figures to be pushed by sophomore Brendan Sullivan and junior Carl Richardson.

Hilinski made five starts and threw for 978 yards in nine appearances last season. He had more interceptions (four) than touchdowns (three) and was part of a mix that got picked off 14 times. Indiana, which had 15, was the only Big Ten team with more interceptions.

Northwestern could have a productive tandem at running back, with 1,000-yard rusher Evan Hull returning and Cam Porter back after missing last season because of a lower-body injury.

Hull ran for 1,009 yards — 5.1 per carry — and seven touchdowns as a sophomore. Porter, a junior, was injured in camp last year after finishing his 2020 freshman season on a solid note. He ran for 142 yards against Illinois that December and rushed for 98 against Auburn.

Northwestern went from owning the league's stingiest scoring defense in 2020 to one of the worst last season. The Wildcats gave up 29 points per game, a massive jump from 15.9 the previous season. They were also 13th among 14 teams in sacks with 19 and gave up a league-worst 213 yards rushing per game.

LB Bryce Gallagher is back for his junior season after contributing 89 tackles — 54 solo — last season. But the Wildcats have a hole to fill in the secondary. Safety Brandon Joseph, an All-American as a freshman in 2020, transferred to Notre Dame.

The Wildcats will be tested at the start, with a trip to Ireland for the season opener against Nebraska on Aug. 27. Each team went 1-8 in conference play last year. Northwestern has a tough stretch beginning in October with a trip to Penn State followed by Wisconsin at home. Ohio State visits on Nov. 5.