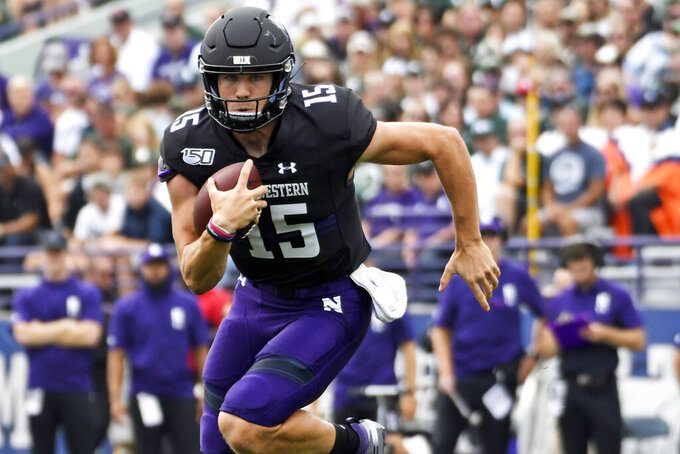 FILE - In this Sept. 21, 2019, file photo, Northwestern quarterback Hunter Johnson (15) runs the against Michigan State during the first half of an NCAA college football game in Evanston, Ill. Northwestern hopes to get some payback against Michigan State. The Wildcats will have their opportunity Friday night when they open at home against the Spartans in what they hope kicks off a run toward their third Big Ten West championship in four years. (AP Photo/David Banks, File)

Getting some payback sure would be a sweet start to the season.

The Wildcats will have their opportunity Friday night when they open at home against the Spartans in what they hope kicks off a run toward their third Big Ten West championship in four years.

“I did not forget the fact they handed us our one loss last season, and I don't think anyone has," said Joseph, a sophomore. “Just like every Big Ten opponent, we know what they are and the capability that they have. They're going to attack it the same way they attack everyone. But there's still a vengeance there. We've still got some making up for that loss last year.”

The Wildcats bounced back in a huge way after going from winning the division in 2018 to finishing last in 2019. They jumped from 3-9 to 7-2 in the pandemic-shortened season and pushed Ohio State in the Big Ten championship game, only to come up short. They finished by beating Auburn in the Citrus Bowl.

Northwestern's only other loss was at Michigan State.

The Wildcats rolled into that game ranked 11th in the AP poll and No. 8 in the College Football Playoff rankings. They were coming off a win over Wisconsin that was their first against a top 10 team since 2011.

Michigan State came in with a 1-3 mark on the way to a 2-5 record in coach Mel Tucker's first season. But the Spartans ran for a season-high 195 yards in a 29-20 victory that seriously dented Northwestern's playoff hopes. Michigan State's only other win was against No. 13 Michigan in the second game of the season.

“It’s going to be about what we do on Friday and then we’ll see what we have,” Tucker said.

Tucker wouldn't say who will start at quarterback. He opted to leave Northwestern guessing. The Spartans' choices were former Temple quarterback Anthony Russo — one of 20 transfers on the team — and sophomore Payton Thorne.

The mobile, 6-foot-2 Thorne made one start and played in four games last season. The Chicago area product was 48 of 85 for 582 yards with as many touchdowns (three) as interceptions (three).

Tucker said he does not plan to rotate quarterbacks.

While Tucker wouldn't say who his starting quarterback is, Hunter Johnson gets another shot for Northwestern. Coach Pat Fitzgerald announced two weeks ago that the senior won the job.

Johnson started five games and played in six in 2019 after transferring from Clemson, completing 50 of 108 passes for 432 yards. He threw one touchdown and four interceptions, and was replaced during the season by Aidan Smith.

With Peyton Ramsey starting, Johnson played in two games last year and did not attempt a pass. He beat out former South Carolina starter Ryan Hilinski and senior Andrew Marty for the job this season.

Northwestern lost leading rusher Cam Porter to a season-ending lower-body injury in camp, a big loss. He ran for 333 yards — 4.1 per carry — and five touchdowns as freshman last season.

With Porter out, the Wildcats have options.

Graduate transfer Andrew Clair averaged 5.1 yards per carry at Bowling Green last year. Sophomore Evan Hull has averaged 7 per attempt and has 495 yards and six touchdowns over two seasons. Freshman Anthony Tyus III could also be in the mix.

Few teams were as effective as Northwestern at keeping opponents out of the end zone last season. The Wildcats ranked fifth in the nation and led the Big Ten in scoring defense.

Their top two tacklers — linebackers Blake Gallagher and Paddy Fisher — are gone. Junior cornerback Greg Newsome II was drafted in the first round by Cleveland.

Michigan State plans to hand the ball off to many players in the opener.

“We have four or five backs that can play and carry the mail for us, tote the rock,” Tucker said. “We like to keep fresh backs because we need guys to be able to hit the holes that are there and break tackles and fall forward on contact.”