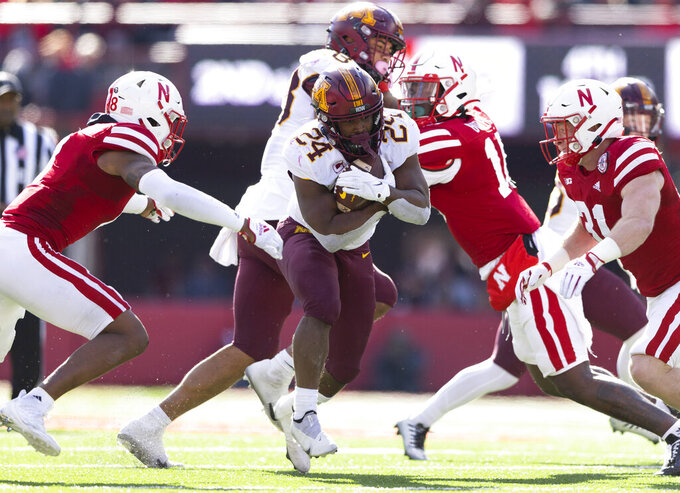 The Wildcats have lost eight straight games since beating Nebraska in Dublin to start the season, the program's longest losing streak in 20 years. The last time they lost nine in a row was a stretch between 1993-94, when current coach Pat Fitzgerald played linebacker for the team.

The Gophers have secured their spot in a bowl and now are playing to move up the selection ladder. They're in a four-way tie for second in the Big Ten West and still in the mix for the division title, despite three straight losses last month that badly damaged their bid. If Purdue beats Illinois and the Gophers follow through as heavy favorites against Northwestern, there would be a four-team tie for first. Illinois holds the tiebreaker over Minnesota.

Northwestern DE Adetomiwa Adebawore vs. Minnesota offensive line. Adebawore is tied for ninth in the conference with four sacks and is tied for seventh, according to Pro Football Focus, with 27 pressures. The Gophers have allowed 10 sacks this year, tied for the second fewest in the Big Ten.

Northwestern: RB Evan Hull. The fourth-year ball carrier leads all FBS running backs with 46 receptions and ranks second in the Big Ten with 1,290 total yards from scrimmage. The only Minnesota native on the roster, from the Minneapolis suburb Maple Grove, Hull has four of his 10 career 100-yard rushing games this season. This will be his first college game at Minnesota.

Minnesota: LB Cody Lindenberg. The fast-improving third-year player moved into the starting lineup three weeks ago and has thrived in the middle of a stout defense. He had one of four sacks last week by the Gophers in a victory at Nebraska and led the team with eight tackles.

The status of Minnesota QB Tanner Morgan is unclear after he was forced out of the last game at Nebraska following a hard hit and redshirt freshman Athan Kaliakmanis helped rally the Gophers to a 20-13 victory. Morgan missed the Oct. 22 game at Penn State with a concussion and returned the following week. ... Northwestern is 8-6 against Minnesota since Fitzgerald took over in 2006. ... The Wildcats are last in the conference with an average of 16.7 points per game. ... Northwestern CB Cameron Mitchell leads the team with seven pass breakups. ... Minnesota RB Mohamed Ibrahim has 17 straight 100-yard rushing games, the longest by any FBS player since at least 2000. ... The Gophers are fourth in the FBS in scoring defense with an average of 14.2 points allowed per game.